The Society of Professional Journalists, Connecticut Chapter, honored NewCanaanite.com with 18 ‘Excellence in Journalism’ awards on Thursday. 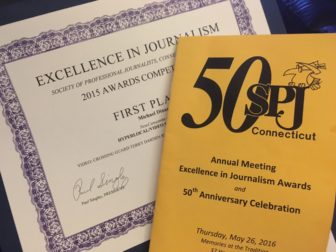 NewCanaanite.com earned eight 1st place Excellence In Journalism awards from the CT Society of Professional Journalists on May 26, 2016.

NewCanaanite.com at the CT SPJ’s annual meeting and awards ceremony in Wallingford earned the following eight first-place, five second-place and five third-place awards in the Hyperlocal category for work published in 2015:

Established in 1966, the Society of Professional Journalists “works to improve and protect journalism,” according to its website: “SPJ promotes the free flow of information vital to a well-informed citizenry and works to inspire and educate the next generation of journalists.”

We also note here that New Canaan resident Scott Ericson, a 1993 NCHS grad, won first-place in the Sports Feature category for his article For Westhill Football Player, It’s All About Heart … and a New Kidney, published in The Advocate of Stamford.

The Hartford Courant won first-place for two of the night’s major awards, the Stephen A. Collins Public Service Award and Theodore A. Driscoll Investigative Award, for its Soccer Stadium Investigation coverage.

NewCanaanite.com was founded Jan. 31, 2014 by brothers Michael and Terry Dinan.