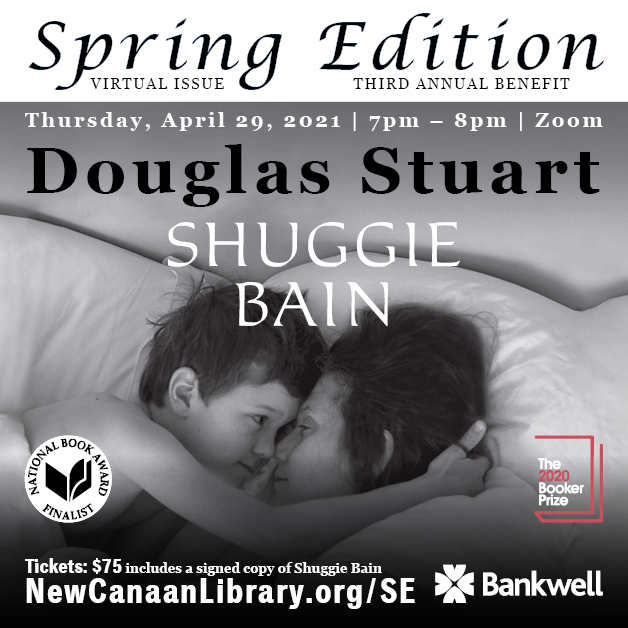 New Canaan Library is pleased to announce this year’s Spring Edition: Virtual Issue fundraiser will feature Douglas Stuart as guest author. Mr. Stuart was awarded the 2020 Booker Prize in fiction for his debut novel, Shuggie Bain, a New York Times bestseller and major international hit, soon to be translated into 34 languages and developed into a full-length film. In addition to the prestigious Booker Prize, Shuggie Bain was a finalist for the National Book Award, a Kirkus Prize finalist, and long listed for the Andrew Carnegie Medal, the Pen Hemingway Debut Novel prize, and the Center for Fiction Debut Novel prize.
Spring Edition: Virtual Issue will be presented live via Zoom videoconference on Thursday, April 29, from 7 – 8 p.m. Individual tickets are $75, which includes a signed copy of Shuggie Bain, available for pick up from Elm Street Books. The event will feature a moderated conversation with Douglas Stuart, followed by a Q & A session. The Library is also pleased to support a special offering from Elm Street Restaurant: the “Shuggie Bain Box,” a unique selection of Scottish culinary delights, prepared by Chef Luke Venner of Elm Restaurant. The “Shuggie Bain Box” may be pre-ordered and picked up at Elm Restaurant on April 29th.
Shuggie Bain is the unforgettable story of young Hugh “Shuggie” Bain, a sweet and lonely boy who spends his 1980s childhood in run-down public housing in Glasgow, Scotland. Thatcher’s policies have put husbands and sons out of work, and the city’s notorious drugs epidemic is waiting in the wings. Gritty and heartbreakingly beautiful, Shuggie Bain is a story of addiction, sexuality, and love. It is an epic portrayal of a working-class family that is rarely seen in fiction and it is, at its core, a story about the unbreakable bond between a child and parent.
For additional information on the event, please visit the Library’s website newcanaanlibrary.org or email Brooke Moore, bmoore@newcanaanlibrary.org.