Michael is a journalist of 20 years’ experience, including 12 focused entirely on the digital space, a former member of the New Canaan Chamber of Commerce Board of Directors and steering committee for the New Canaan High School Senior Internship Program.

Immediately prior to launching NewCanaanite.com on Jan. 31, 2014, Michael oversaw Patch news sites in Westchester and Fairfield Counties, as many as 48 at one point (including New Canaan). He served as the senior editorial manager for New Canaan for his entire four years with the company. There, he developed Patch’s user engagement strategy and led the editorial team that covered the Newtown school shooting, earning the company’s Mission & Values Award.

Michael grew up in New Canaan, attending Center School until they tore it down after he finished second grade with Mrs. Fischer, then East, Saxe and New Canaan High School.

He attended the University of Pennsylvania and University of Oxford, studying philosophy at both and graduating with a bachelor’s degree. With that in hand and with his mom’s blessing (“I want my children to do whatever they want, as long as they’re happy”), he became a slow, overly talkative bartender.

While working in a bar in San Francisco two years after graduation, he met his would-be wife, Marie, following her to Austria and Ireland at summer’s end while she earned a university degree in her native Dublin. Together they returned to Fairfield County and married just as he launched his journalism career as a stringer for The Advocate. In 2004, a wretched year for baseball, Michael was hired as a staff writer at Greenwich Time newspaper, covering health, housing, social services and the waterfront.

Between the paper and Patch, he worked for two years at a Norwalk-based online B2B covering IP communications technology.

Michael and Marie live in Stamford with their dogs (pictured at the very bottom of this page).

Michael and his wife the same month that NewCanaanite.com launched adopted their fourth dog, Marvin (rottie-shepherd mix) from a high-kill shelter in Alabama, and added a fifth, Dexter (golden retriever), who was surrendered because his owner developed an allergy to the puppy’s hair.

Susan Gelvin is a longtime resident of New Canaan who graduated New Canaan High School in 1992. Currently, she is co-president of the Saxe Middle School PTC, a mother of two, and likes shiny things.

Chandra has 14+ years of professional journalism experience and has held various writing, editing and PR positions at Belvoir Media Group, HooplaHa, Patch, Red 7 Media, and ProfNet. Throughout her career, she has covered numerous topics including, local, regional, and breaking news, arts & entertainment, business, technology, and health. During her time at Patch, Chandra received the company’s “Mission and Values” award while serving as an associate regional editor for her role in covering the Sandy Hook tragedy in 2012. She graduated from Virginia Union University in 2001 with a Bachelor’s degree in English, an Associate’s degree in Journalism, and a minor in Music. She received her Master’s Degree in Magazine, Newspaper, and Online Journalism from Syracuse University the following year. She currently lives in Norwalk with her husband and two daughters. 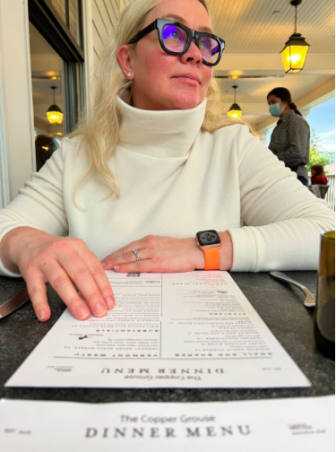 Laura Ault is a writer, creative director, and founder of a mission-based marketing consultancy, Good Witch. She’s a graduate of Colgate University, a proud Northern Californian, and the thing she misses most about working in the corporate world is the golden era of expense account lunches. She lives with her husband, three dogs, and two cats on New Canaan’s west side, and yes, she knows that’s a lot of pets.

One of many in the multi-generational Pennoyer family from New Canaan, Darcy Stiles Pennoyer grew up down the street from the Dinans, and she is an alum of Center School, Saxe and NCHS. Currently a New Canaan resident and now Darcy Pennoyer Smith, she is a freelance writer and blogger. She volunteers with various organizations such as the West School PTC, Junior League of Stamford-Norwalk, and New Canaan Cares. Her sons attend New Canaan Public Schools, and her husband Jud is a managing partner of Smith Hanley Associates LLC. The Smiths recently rescued two kittens, and the litter mates are settling quite nicely into their new home.

Darcy attended Ohio Wesleyan University and studied French, English, and politics & government before working as a journalist’s assistant at the United Nations, an assistant in a law firm, a marketing associate at a healthcare company, and an independent floral designer (she’s done flowers for over 100 events). Her longest stint with an employer other than herself was with New Canaan High School, where she worked first as a chemistry lab aide to see if she liked working with teenagers all day (the answer was yes), an intern in the English and world language departments, and then as a certified English and French teacher. Darcy earned a Master of Science in education from the University of Bridgeport in 2000, and she resigned from NCHS in 2014 in order to have more flexibility to care for her family. She still likes working with teenagers, so she tutors students in reading, writing, and the college essay.

Darcy loves New Canaan, and some of her favorite spots are the NC Nature Center, Waveny, Elm Street Books, Cherry Street East, and Gates. She enjoys all the Next Station to Heaven has to offer although the parking in town is a bit out of control, and she does like a stable post office.

Jes has lived in New Canaan since 1995, attending South and Saxe before graduating from New Canaan High School in 2009. Following that, he attended the University of New Hampshire in Durham, N.H. During his time there, Jes volunteered in the athletics department with both the Women’s basketball program as their manager, and Media Relations where he helped out at several different UNH athletic teams’ events. He graduated summa cum laude in 2013 with a B.S. in Kinesiology: Sport Studies. An avid baseball fan, specifically of the Mets. he enjoys going to Dunning Field to watch Rams football games, and his favorite restaurant in New Canaan is Cherrystreet East.

After spending 17 years in media planning, Laura took a break from full time employment and moved with her husband and three children to New Canaan in 2002. Laura had had the pleasure of serving on the Board s of both the New Canaan Youth Football and ABC of New Canaan. Laura also volunteered extensively in the Schools and New Canaan Lacrosse Association including a term as East School PTC co-president. After spending time working in business-to-business marketing, Laura landed at the New Canaan Chamber of Commerce as Marketing Associate in 2012. Working alongside Executive Director Tucker Murphy, Laura enjoys working daily to fulfill the Chamber’s goal of “connecting the community with commerce.” While technically “empty nesters,” Laura and her husband Scott do share the house with their rescue dog @candace_the_Coonhound.

After attending New York’s School of Visual Arts, New Canaan native Julia Stewart worked in television production for many years. Upon her return here she worked for a local architecture firm, before becoming a full-time mom. Married to Doug Stewart, one of the owners of Walter Stewart’s Market and Stewart’s Spirits, she is the mother of Scarlett, Audrey and Griffin and a golden retriever named Daphne. She is thrilled to join the editorial board of the New Canaanite.

A resident of New Canaan since 1994, Rob has been married for 27 years to his wife, Elizabeth Howland, and they have two children, Robby IV and Kit, both of whom attended New Canaan Public Schools. The owner of Bob’s Sports Inc. in New Canaan and a partner at Caroline Realty LLC, Rob served for four years as a selectman and six more years as first selectman of New Canaan, from 2011 to 2017. Rob’s past club and organization affiliations include with Rotary Club, New Canaan YMCA. New Canaan Winter Club and Poinsettia Club. He has served for many years with the New Canaan Fire Company, is currently an active member, and past awards include “New Canaan Business of the Year” from the Volunteer Center of New Canaan, the Boy Scouts of America “Good Scout” Award, and “Firefighter of the Year and “Distinguished Service Award” from the New Canaan Fire Company.

After living several years in Manhattan directly above the Holland Tunnel entrance, Andrew and his wife Laura have happily called New Canaan home for 5 years, and look forward to doing so for many more. A veteran of the advertising, entertainment and media business for 20 + years, Andrew also once-upon-a-time worked in public radio as a journalist for KFAI 90.3 FM in Minneapolis. He and Laura love exploring New Canaan’s amazing green spaces with their dogs Sally and Penny, enjoying the non-Holland Tunnel peace & quiet of the New Canaan indoors with their rescue cats Bobby and Polly, and reviewing the ever-expanding wealth of great local restaurants for NewCanaanite.com.

Michael Chen is currently the General Partner and CEO of Chen & Associates, an advisory services firm focused on the financial services, media, aviation, and food industries. Michael co-founded the firm in 1997 and joined full-time in 2013. His primary focus is managing a family office in Connecticut. In addition, he serves as the Vice Chairman of Grace Farms Foundation. He also serves as the Chairman of The CEO Forum, a fast growing media company focused on disseminating CEO wisdom exclusively to the top 10,000 CEO’s and aspiring CEO’s. From 2012-2013, he was a Management Committee Advisor and Strategic Partner to the Chief Investment Officer at Bridgewater Associates. From 2011-2012, he was the President of NBC News’ Strategic Initiatives Group and served on the Board of Directors for The Weather Channel. Prior to joining NBC News, Michael was a GE Officer and President & CEO of GE Capital’s Media, Communications, and Entertainment (MCE) business from 2006-2010. He worked at GE Capital from 1994-2006 in several executive positions in the aviation sector (GECAS), including leading the North America business from 1999-2006. He was also the Chairman of the Board and creator of the Peacock Equity Fund from 2006-2010, which was a digital media fund supported by GE and NBC Universal that returned 40% IRR before being merged into Comcast Ventures. Michael has been featured in Forbes and the Wall Street Journal. He currently serves as an Emeritus Advisory Council member for the SC Johnson School of Business. In addition, he previously served on the Board of The Weather Channel, the Norwalk Community College Foundation, the Diversity Advisory Board at Sodexo Corporation, the Executive Diversity Council of GE, and the Planning Team for Grace Community Church. He received his B.S. in Electrical Engineering from the University of Rochester and an MBA in Finance from the SC Johnson School of Business at Cornell University. He and his family have lived in New Canaan for 27 years. He currently is a member of the Board of Finance for the Town of New Canaan.

Doug is the owner of Zumbach’s Gourmet Coffee and founder of Caffeine & Carburetors. A past board member of the Chamber of Commerce who had served on the editorial board of Moffly Media publications, Zumbach is a current member of the New Canaan Men’s Club and New England Auto Museum. As owner of the iconic Pine Street coffee shop, Zumbach earned the 2016 Merchant of the Year Award from the Chamber.