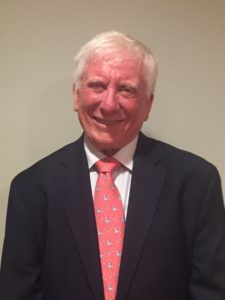 During World War II, America’s industries retooled to build the ships, planes, rifles and supplies necessary to support the combat troops in Europe and Asia. At Friday’s meeting of the New Canaan Men’s Club (October 15), Charles Salmans will describe the Ford Motor Company’s role building the B-24 Bomber, which, at its peak, turned out one plane every 55 minutes.

The planes were assembled at Ford’s Willow Run plant, located between Ypsilanti and Belleville, MI, in a facility specially built to mass produce the planes. At 5 million square feet, the plant was said to be largest factory under one roof in the world.

Inspired by Arthur Herman’s book, Freedom’s Forge, history buff and student of World War II, Salmans describes his account as an inspiring story of American industrial might joining to defeat an existential threat. In manufacturing the planes, the plant had to adjust to building a plane that had 1.2 million parts, far more than the 15,000 parts that were in cars manufactured at the time.

The New Canaan Men’s Club has openings for new members, men 55-years-old and above. For further information, email ncmens@ncmens.club.