New Canaanites turning their calendars from February to March may be dreaming of many things: parking on snowless streets, walking along iceless sidewalks, cycling in slush-less bike paths.

Yet the realities of March in New Canaan likely will include more snow days and Metro-North Railroad breakdowns before we see the 5,000 daffodils at Irwin Park.

And before the end of the month, many of us will seek clarity on President Barack Obama’s Affordable Care Act. That’s because, as the now-stabilized healthcare.gov website reports on its homepage, open enrollment for this year ends March 31. 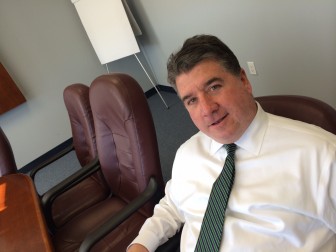 “There just seems to be a massive amount of confusion on what’s going on, people wondering ‘What should I be doing?’ ” Rogers, president of Stamford-based The SIG Insurance Agencies, told New Canaanite.

We asked Rogers to clear up the top-three misperceptions he’s encountering with regards to ACA, and he does just that (see below).

First, some background on Rogers himself.

A New York City native who moved to town eight years ago, Rogers and his wife have one son at West School and another who’s gearing up for preschool.

“We love the town,” Rogers said of his time in New Canaan. “We love to support the town.”

A past chief of the Y Guides’ Kwakiutl tribe, Rogers himself sits on the board of New Canaan Baseball/Softball Inc. and coaches baseball, soccer and basketball. (Just recently he assistant-coached, with head coach and former NBAer Pat Garrity, a 3rd-grade boys’ travel hoops team to a championship game took a 13-0 season all the way to the final, only to lose by a single bucket—still a great season, boys.)

Rogers in his work has been involved in Stamford for 22 years. Before we get to his top-3, here are some basics to understand, according to Rogers.

Everyone was supposed to have insurance as of January. Essentially, there are two ways to get health insurance—through work or individually. In the individual market, an exchange has been established (“basically a quasi-governmental marketplace,” Rogers says) where Connecticut residents can go and—if their income meets certain requirements—receive a subsidy from the federal government.

The window for that closes March 31—by then, residents must be enrolled in an exchange or individual plan that would take hold May 1.

“Then it shuts down until the end of the year, when they start open enrollment for 2015,” Rogers said. “That said, you could continue to have access to individual plans. Say you have a plan in May that is coming up for renewal, and you have options, then you could enroll. But if you don’t have coverage now and want to buy coverage, you cannot wait until you get sick. You have to enroll now.”

2. “The timing. People don’t know there are certain provisions of the Affordable Care Act that pertain to various-sized businesses, like large employers. All employers must offer coverage if they’re over 50 employees. It was supposed to be effective 2014, but was deferred for a year, until 2015. And now just recently they deferred anybody from 51 to 99 employees until 2016, so I think there is confusion generated by the government on the timelines.”

3. “The question of: Can I keep my coverage? Basically everybody was told, ‘Yes if you like your plan you can keep your coverage.’ But that is not the reality, because plans that do not meet the criteria will be replaced with new plans. There are some people that took out or renewed their plan in late 2013. And when November 2014 rolls around, their plan is going to be cancelled and they’ll be offered new coverage that meets the ACA guidelines. So, there is just a lot of confusion about that—‘Can I keep my plan?’—and the short answer is ‘No.’ There were some techniques used to defer when the pain would kick in, so that is a source of a lot of confusion as well.”