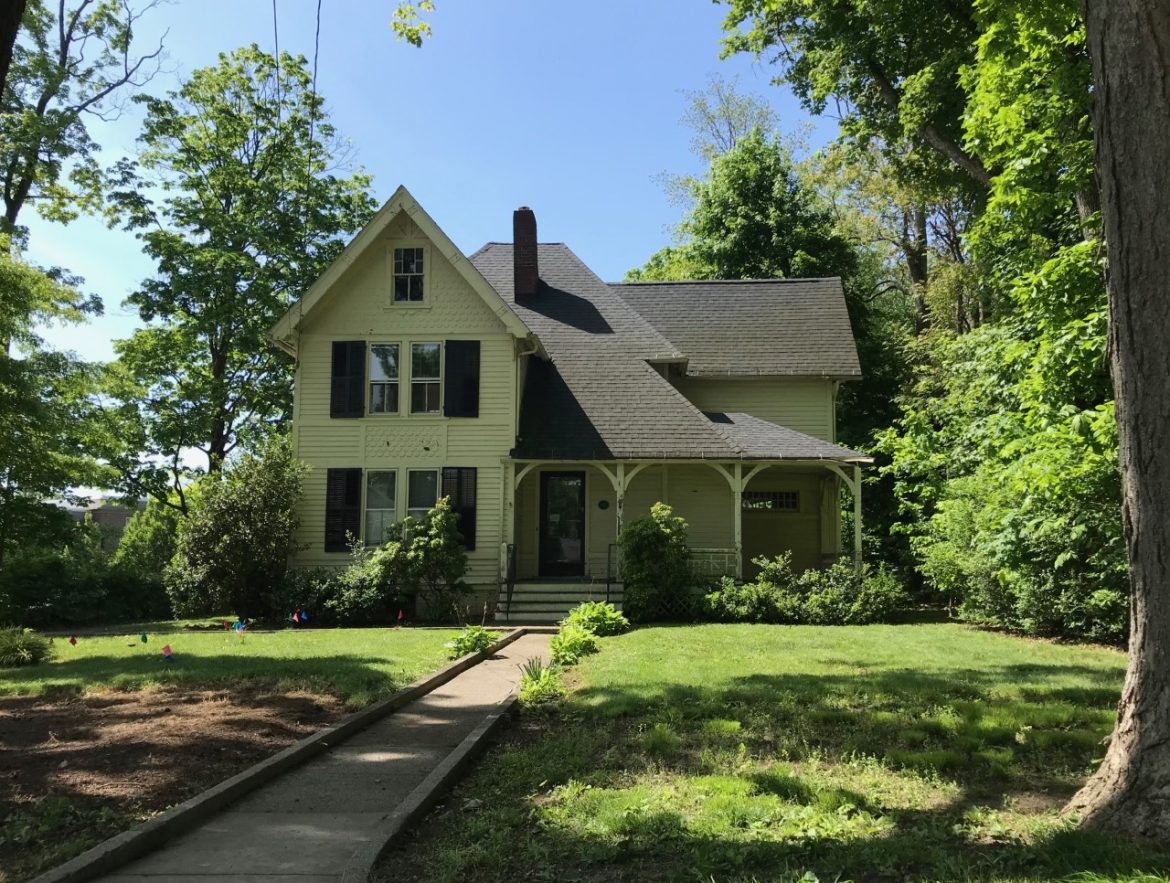 The town on Tuesday received an application to redevelop a property at the former Red Cross building on Main Street, moving the ca. 1889 structure closer to the road and putting in a multi-family residential structure with 20 apartments behind it. 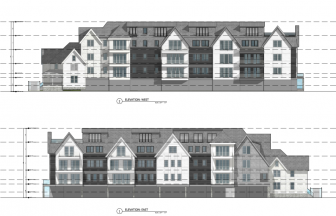 The proposed redevelopment will include nine one-bedroom units and eleven two-bedroom units, and as an affordable housing project six of the units will be rented at lower rates, according to the voluminous application. The building itself will include a grade-level parking garage and four stories on top of that, for a total building height of 52 feet and eight inches, according to the application filed by attorney Ryan Hoyler of Hartford-based Hinckley Allen.

Hoyler represents property owner 51 Main Street LLC, which acquired the antique building and .38-acre parcel in 2017 for $740,000, tax records show. The company’s agent is listed in Connecticut Secretary of the State records as Arnold Karp, a local developer. 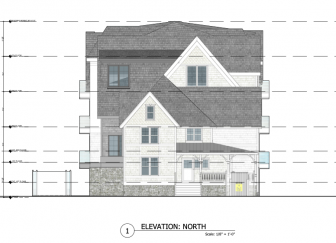 According to the application, “[t]he existing building is significantly deteriorated and has been since prior to its acquisition by the applicant in 2017.”

The “Red Cross building,” as it’s known locally, since that organization had owned and occupied it for 65 years, is the southernmost property located in New Canaan’s Historic District. The applicant will file a separate application with the municipal body that oversees the District, Hoyler said.

“While much of the exterior carpentry is in a state of disrepair, with multiple areas that exhibit extensive wood rot, we believe that most of the structural framing is sound and able to be moved and restore,” it said. “Should further investigation reveal that the structure is compromised, structural shoring sufficient will be added to safely move the structure. The plan is to replace the exterior trim, carpentry, and windows that are beyond repair due with solid wood to look like the original. Any identified insufficiencies in the existing structure will be bolstered and new mechanical, plumbing and electrical systems will be added.”

Though extensive work is needed, “preserving the Red Cross building is a goal of this redevelopment,” Hoyler said in the application.

“To this end, the applicant has laid out a series of steps to achieve such preservation. This plan includes the construction of a new concrete and masonry block foundation, compliant with the Building Code, built further forward on the property and closer to the street. Moving the historic structure will allow for the construction of residential units behind the preserved building, while the preserved structure will continue to be predominantly visible.”

It comes at a time that New Canaan is susceptible to applications filed under Connecticut General Statutes section 8-30g. For towns such as New Canaan that do not meet a standard whereby 10% of all housing stock qualifies as “affordable” under the state’s definition, developers and other property owners may appeal local P&Z denials to the state, effectively skirting local zoning regulations. New Canaan in 2017 had achieved four years of relief from the law with the denser redevelopment of the affordable housing complexes at Millport Avenue, but was unable to achieve another four-year “moratorium” immediately following the expiration of the last one in June 2021. (The town has not yet filed its application for a new moratorium, Brooks Avni said Wednesday in response to an inquiry from NewCanaanite.com.)

Another attorney at Hinckley Allen, Tim Hollister, earlier this year filed an application for a 102-unit development under 8-30g at Weed and Elm Streets—a proposal that has garnered wide opposition from neighbors.

Anticipating a similar application in a Karp-owned Hill Street property in their neighborhood, residents in the area of Brushy Ridge Road also are voicing opposition to an expected affordable housing proposal. Recently, leaders among the neighbors, who have formed a group calling itself “New Canaan Residents Against Destructive Development,” emailed members saying they had succeeded in “temporarily shutting down construction on Mr. Karp’s Hill Street property.” Specifically, the group said, it has prompted the U.S. Army Corps of Engineers to compel the property owner to obtain a permit for construction activities on the vacant parcel, and also has prompted the town to issue a Notice of Violation and cease-and-desist order there.

Asked about Hill Street, Karp said, “We will apply for all permits that are necessary.” Noting that no application has has been filed for Hill Street, he added, “We have stopped construction because there is nothing else to do there.”

According to the 8-30g application for 51 Main, the Red Cross building site is appropriate for such a multifamily residential redevelopment for several reasons, including: its proximity to the train station, shops and parks; the area already has other such residences; the proposed height is comparable to Town Hall’s nearby; and the proposed structure’s proximity to Main Street is similar to other buildings such as the firehouse. The project also is consistent with the Plan of Conservation & Development, a guiding document for the town.

The application itself has three main parts—the site plan, as well as a proposed text amendment of the New Canaan Zoning Regulations and attendant zone boundary change.

According to a “Traffic Impact Assessment” that forms part of the application, “there will be no adverse impacts to background traffic conditions due to the development, and whatever minor increase in traffic arises from the development can be accommodated without adverse impact on the operating conditions of the adjacent roadways.”

“Finally, the Assessment demonstrates that there will be sufficient intersection sight distance at the site driveway off Main Street,” the application said.

A total of 33 parking spaces will be made available to residents of the apartments, it said.