The New Canaan Nature Center—a place where generations of local families have learned about animals, attended preschool, hiked trails and studied nature—began in 1960 for purposes of “an arboretum, bird sanctuary, nature center, horticulture, and for passive recreation,” according to a deed given to the town by Susan D. Bliss, the property’s prior owner.

The deed also specified that the Nature Center would serve as “a museum site,”  newly appointed Executive Director Bill Flynn told a group of visitors this week.

For Flynn, the first permanent director at the Oenoke Ridge Road facility in more than one year, part of what the Nature Center strives to do is “prove that we’re worthy of [Bliss’s] generosity.” 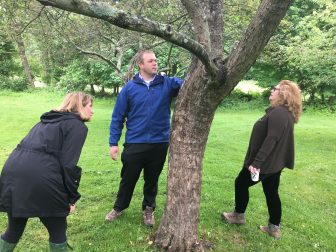 Bill Flynn points out woodpecker holes in a tree during a walk around the Nature Center’s trails. Credit: Sam Stoner

“This is a gift” and a “magnificent piece of our town,” Flynn said during a meet-and-greet and tour on Tuesday morning that included a talk at the Visitor’s Center and hike around the campus.

A staff member at the Nature Center for seven years, Flynn is in a unique position to both appreciate the organization’s rich history while also eyeing immediate and future needs, including for its several buildings.

Priorities now for Flynn include maintaining and building on a strong relationship with the town, he said, as well restoring certain buildings on campus. That’s a timely topic, given that a recently appointed committee is studying the Nature Center’s use of its buildings and finances to help prioritize future capital funding. 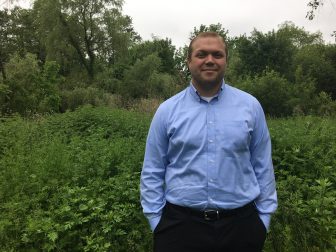 Flynn told NewCanaanite.com: “One of my biggest charges is being the face of the Nature Center and going out in the community and making those connections, and that’s something I’ve been concentrating on and focusing on.”

He added: “It is our goal to revamp and look at all of our buildings here on the property, and it’s a conversation with our budget and with what the town can do for us, and the town is always a very good partner with us in how we go about that.”

Flynn succeeded interim Executive Director Mary Emerson who had been filling the position for more than one year.

A University of Colorado, Boulder graduate with degrees in environmental, population and organismic biology and pre-medicine, Flynn came to town in 2010 with his wife. He has worked at the New Canaan Nature Center since that time as an environmental educator and director of animal care, as well as running summer camps, taking children on day- and week-long nature trips. They have one child.

Though the day was cold and cloudy, a small group of visitors on Tuesday followed Flynn on a short walk around some of the Nature Center’s buildings and onto the trails, where he pointed out various plants and described how the organization uses the grounds.

“We’ve been doing most of this since they started back in the 60s,” Flynn said a tour, referring to the various ways the Nature Center fulfills its mission.

“Our preschool is going to celebrate its 50th anniversary,” he said. That’s “the oldest nature-based preschool in the country, which is spectacular.”