Months after complaining that a neighbor’s new privacy fence is one inch higher than allowed under the New Canaan Zoning Regulations, a Brookwood Lane couple has filed a formal appeal with the town. 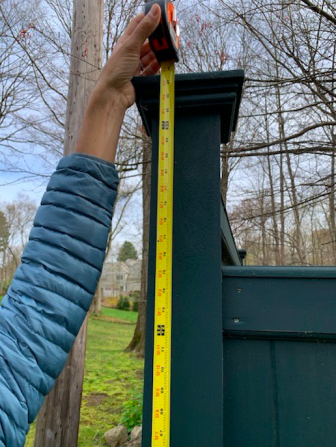 Top of the fence in question. Photo on file with Planning and Zoning

The fence that runs along a dead-end lane shared by three homeowners presents a safety concern, according to Chris and Carolyn Susanin of 34 Brookwood Lane.

“Our primary concern is the safety of our children (6 and 10 years old) and our 2 dogs,” the Susanins wrote in an appeal.

“When you are traveling on the accessway, our yard cannot be visualized until you are directly on the property where the fence ends,” according to their written statement of appeal. “This is the point where the fence is at its highest point above finished grade (over 7 feet). The fencing eight is so illegally high that you cannot see over it. If a child or dog were to run across the shared drive to our neighbor’s home and not look for a passing truck or car, they could get hit very easily. There is no time for a motorist to stop. We believe the accessway should be considered a street with the amount of traffic from trucks and deliveries. UPS/Fedex trucks race up and down the lane. The neighbors at 36 Brookwood have had ongoing contraction for 2 years. The amount of trucks passing is constant. Some drivers that don’t understand it is an accessway might get up to speeds over 35 mph.” 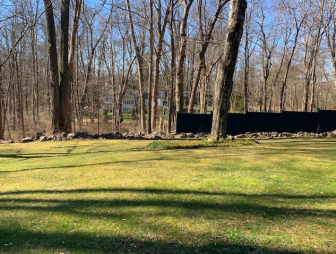 The fence in question. Photo on file with Planning and Zoning

The Zoning Board of Appeals is scheduled to discussed the matter during its regular meeting at 7 p.m. Monday.

According to a memo from the town planner to the ZBA, a zoning permit had been issued Feb. 10 to the owners of 44 Brookwood Lane. Some time after the fence went in, “the appellant came in to the Planning and Zoning office to register a complaint that the fence was actually six feet one inch tall,” the planner said in the memo.

Following an investigation “and after much back and forth” with both sets of neighbors, the town issued the zoning permit, the planner said. 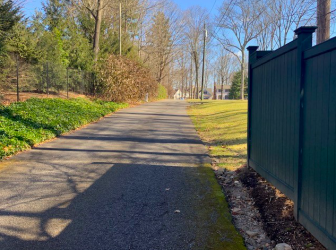 The fence in question. Photo on file with Planning and Zoning

The appeal itself cites a provision of the Zoning Regulations that prohibits fences higher than six feet “above finished grade when in a front yard and located behind the front yard setback line” (see page 142 here). 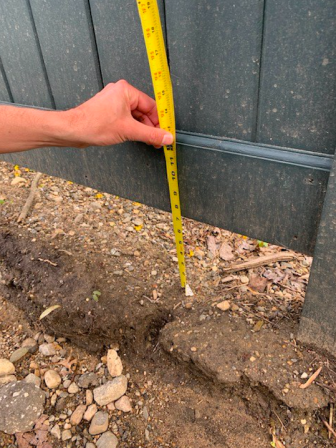 The bottom of the fence in question. Photo on file with Planning and Zoning

According to the Susanins, the neighbors “installed a stockade fence along the access way in three phases gradually over the last 2 years” and they filed their complaint of violation to the Planning and Zoning Department.

“The panels fo the fence are [six-foot-one-inch], they are planted mostly above the finished grade, and have posts that extend the height even further,” their appeal said. “In some cases, the total height is close to 7 feet. After interacting with P&Z, the neighbors chose not to correct the issue. Instead, they tried to alter and raise the natural finished grade by throwing dirt underneath the panels. This has since washed away. Subsequently, the neighbors added to the fence, taking it around the corner from the accessway to extend part way across our property boundary line. The fence along our property line is useless in terms of privacy because there is another 100+ feet of non-fenced area which allows us to see directly to their home.”