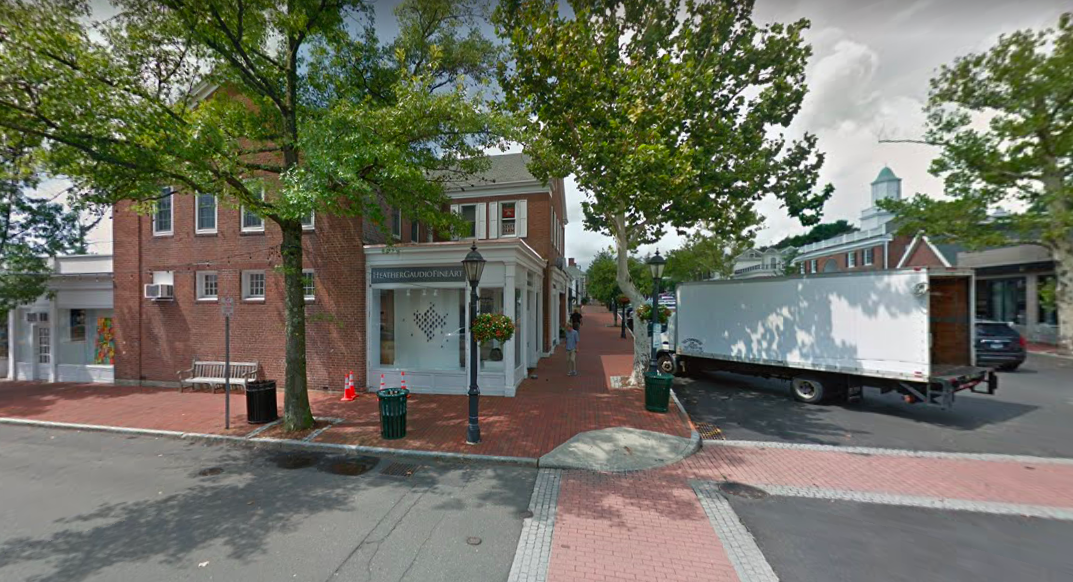 Here's where she fell, at South and Elm. Streetview

The parking enforcement officer who tripped and fell downtown two winters ago failed to look where she was going, according to a New Canaan-based construction company that had done roadwork there.

Marianne Borchardt crossed the intersection of South Avenue and Elm Street “with complete disregard for her own safety” before falling down on Jan. 3, 2019, according to an answer to the lawsuit she brought to Peter Lanni Inc. earlier this year.

Borchardt, who worked for the Parking Bureau from May 2017 to December 2019, sued Lanni in January. The town in February joined the suit as intervening complainant.

She “failed to take the necessary and proper precautions to observe the conditions” at South and Elm and “failed to step over, around or use an alternate route, or otherwise avoid the alleged uneven and elevated portion of the roadway, despite having the opportunity and obligation to do so,” according to special defenses filed June 2 on Lanni’s behalf by attorneys Richard Mather and Bridget Ciarlo of Cheshire-based Nuzzo & Roberts LLC.

The attorneys also say the statute of limitations has expired on the claim, since the drainage project Lanni had worked on wrapped up in December 2016.

Nuzzo & Roberts LLC has filed a claim for a jury of six in the matter.

In her complaint, Borchardt said she tripped on “uneven and elevated pavement” that Thursday morning while working downtown, and that Lanni was negligent in its roadwork, failed to notify passersby of the “dangerous, hazardous and unsafe conditions.” Borchardt suffered 15 injuries “of a serious, painful and permanent nature,” including a cervical spine strain, left ankle and foot injuries, cognitive impairment, tinnitus, concussion syndrome and bruise on her left eye, according to her complaint.

In answering the suit, the Nuzzo & Roberts LLC lawyers said, “[I]f the condition alleged in the complaint existed at the time of the incident, it was open and obvious, and the plaintiff assumed the risk of traversing the same.”