Over the first two games of the 2014 season, the New Canaan Rams softball team saw some great pitching, solid hitting and adept fielding. The only issue was…they couldn’t put it all together in one game. 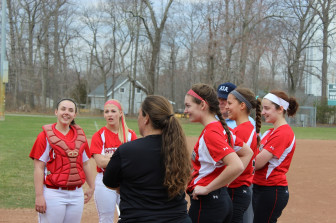 On Thursday the Rams lost the season opener at Fairfield Ludlowe 1-0, as they could only muster 4 hits for hard-luck starter Ali Reilly. And in the home opener the following afternoon, the Rams dropped a 9-5 decision to Greenwich in a game that saw its fair share of hits–including a home run by freshman Molly Keshin–but also its fair share of errors.

“You expect things like this,” Rams head coach Danielle Simoneau said following the Greenwich game. “There were things that we didn’t see yesterday that we definitely saw today. That’s what you look forward to. You want to make sure they’re growing day-by-day.” 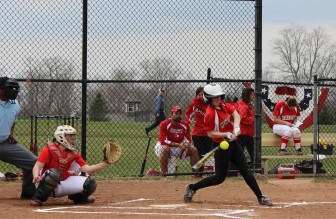 Especially exciting for Simoneau and the Rams is the immediate emergence of the Keshin twins as legitimate high school players. Rachel Keshin has stepped into the leadoff spot in the batting order and the starting shortstop position in the field. She has been a bright spot in both roles, with 2 hits against Ludlowe and 2 more against Greenwich while showing good range and a strong arm on defense.

Molly Keshin has taken over at catcher and had a breakout day against Greenwich with three hits and 2 RBI, including the HR blast to center field. 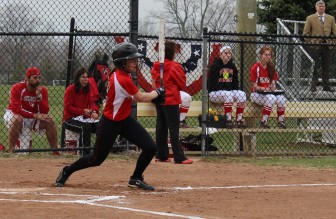 Molly Keshin follows through on a base hit.

“It was right down the middle, and I thought it would be a good one to hit,” Keshin told NewCanaanite.com. “It felt really nice, because I sometimes let the pressure get to me. I was able to let it go on that one.”

In the Ludlowe game, the Rams and Mustangs matched zeroes through the first 3 innings. Both teams had scoring chances, but were unable to put anything across until Fairfield finally broke through in the bottom of the 4th. Freshman Brittany Romero started things off with a double and went to third on a sacrifice bunt. Colleen Lambert blooped a hit into right field to score Romero for the game’s only run. 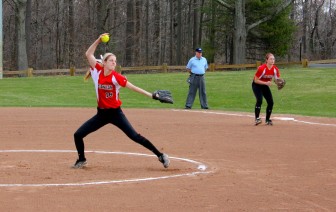 Jamie Schlim fires in a pitch.

Against Greenwich, the Rams jumped out to an early 3-0 lead behind hits by Colette Pellegrini, Ali Reilly, Molly Keshin and Molly Rochlin. Starting pitcher Jamie Schlim was in command until Greenwich broke through with 2 unearned runs in the 2nd inning.

The Cardinals would take the lead in the 3rd, scoring 4 runs – all with two outs. Erin Ferguson provided the big blow for Greenwich with a bases-clearing triple. Once again, defensive miscues would be the culprit as only one of runs was earned. 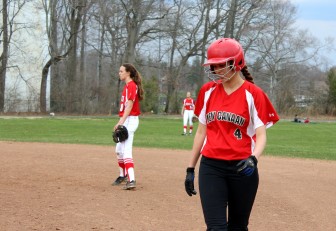 Colette Pellegrini after a hit.

New Canaan was able to load the bases in the 4th with only 1 out, but was unable to push any runs across. Meanwhile Greenwich scored 2 more runs in the top of the 5th, extending to an 8-3 lead. Molly Keshin’s leadoff HR and one additional run scored in the bottom of the 5th helped New Canaan draw to within 8-5, but that was as close as they would get. Greenwich tacked on one additional unearned run to make it 9-5, which held up as the final score.

“It’s a lot of pressure on these freshman, there’s a lot of them out there,” Simoneau said. “They feel like the world is staring at them, so you have to cut them a little slack. The positive thing is they didn’t quit. I’m proud of them.”