The owner of a Ledge Avenue duplex on Nov. 22 filed eviction papers in state Superior Court, saying a tenant there hasn’t paid $2,950 in monthly rent since September. 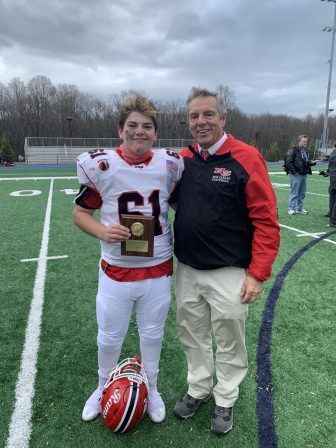 Congratulations to New Canaan High School senior and football player Jaden Konspore on receiving the Jim Girard Memorial Sportsmanship Award. Named after an area sports legend who coached Darien High School’s football team in the 1980s and became its athletic director prior to succumbing to leukemia in 2002, the award is given annually at halftime of the Turkey Bowl to one NCHS and one DHS player based on the athlete’s performance during the year.

Janet Lindstrom, longtime acting chair of the Historic District Commission, is stepping down to become an alternate on the appointed body, and Tom Nissley is joining the Commission as a regular member, following a unanimous vote Tuesday by the Board of Selectmen. Todd Lampert also is joining as a regular member, following the Board’s 3-0 vote Tuesday. Other new appointments made by the selectmen include Michael Chen becoming a regular member of the Board of Finance, and Andrew Melillo replacing Laszlo Papp on the Historical Review Committee. 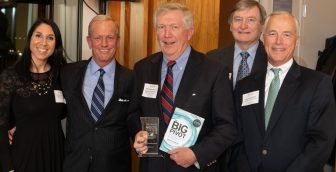 The town of New Canaan on Tuesday was honored with an Energy Efficiency Award in the “Municipality” category at the Stamford 2030 District’s Annual Change Maker Awards. The town in the past year-plus has brought in natural gas and also installed solar panels at Town Hall and three other town buildings.

New Canaan Police at 11:36 p.m. on Nov. 22 cited a 26-year-old Norwalk man for possession of less than .5 ounces of marijuana and possession of drug paraphernalia after stopping him on Old Norwalk Road for driving with one headlight out.

Officials from the Waveny Park Conservancy say the organization has taken on a new, additional project enlarging the berm at the far end of what many locals know as the “cornfields” are in the southeastern corner of the park. The project will block out the sound and the view of traffic from the Merritt Parkway. The berm material was taken from the hard pan layer at the bottom of the newly restored pond at the foot of the sledding hill. It will increase the height of the berm to nearly 10 feet.

The New Canaan Police Department on Nov. 16 earned its 9th CALEA Award from the Commission on Accreditation for Law Enforcement Agencies. The organization during the summer conducted a multi-day audit at NCPD of 393 standards including policies, procedures and operations. Its finding include that the department’s officers are “responsive, professional, energetic, dynamic, collegial, caring, helpful, accommodating, thoughtful, deliberate, people-oriented, a culture of service, and community-minded.”

Here are some local events worth booking: 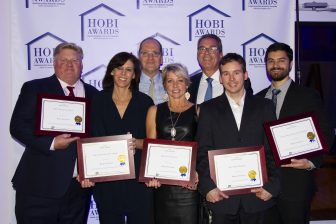 The Karp Team celebrating its 5 HOBI awards on Nov. 20 at the Aqua Turf Club in Plantsville. Contributed 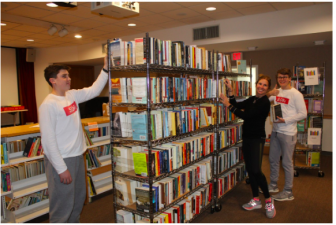 The Exchange Club of New Canaan launched its annual Christmas Tree sale at Kiwanis Park Nov. 29 and it will run through Dec. 22.

The New Canaan High School Service League of Boys or “SLOBs” have been busy helping the New Canaan Library get ready for its winter book sale, which begins Friday and runs through Monday.