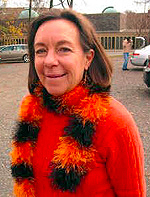 Born in Bridgeport, she was raised in Southport, where she was the first female Junior Commodore at the Pequot Yacht Club. She attended Thomas School, then in Rowayton, and went on to Skidmore College, where she earned a B.A. in Mathematics in 1966.

In 1966 she married Alfred Warden and they had three children: Elizabeth (“Lisa”) Warden, wife of Robert Dahlen, of Denver, CO; Robert Warden, husband of Margaret, of New York City; and Sarah Warden, wife of Ismael Casado, of Brookline, MA. In 1999, she married George A. Brakeley III of New Canaan.

Ellen was an active sportswoman, competing in interclub tennis and paddle at the New Canaan Field Club, of which she was a member for almost 40 years and which she served as secretary for two years. For the last 20 years of her working life she was a paralegal at Hawthorne, Ackerly & Dorrance of New Canaan. A lover of fireworks, she was secretary of the Family Fourth Committee for several decades.

She is survived by her husband and her former husband; her three children and their spouses; five grandchildren—James and Katie Dahlen, and Max, Eloise and Nicholas Warden; her stepchildren Kristin Fox of Pittsburgh, PA, and William Brakeley of Wilmington, DE and their families; and many loving friends, especially Suzanne Jonker of New Canaan. Ellen was predeceased by her brother Donn Smythe in 2013.

She was a wonderful mother and an extraordinary grandmother who was caring, funny, always young at heart and generous. Her husband George described her as “a Pied Piper who left a trail of friends wherever she went. She was a blithe and charming spirit.” She and her Bijon Frisee, Bolita, were familiar figures walking through town each morning for years. She departed this world far too soon and will be missed.

Contributions in her memory may be made to Staying Put in New Canaan, P.O, Box 484, New Canaan.