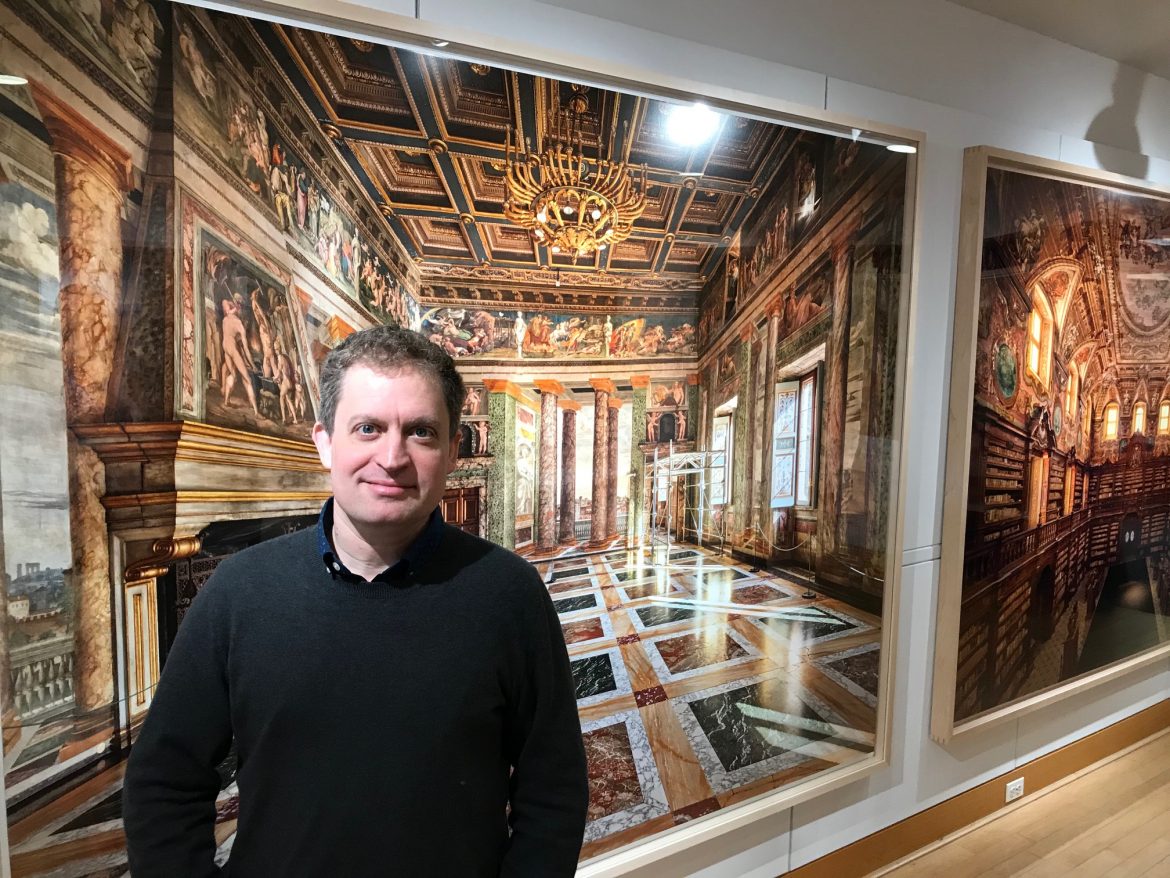 Any time a professional engagement has him traveling to Stamford or Manhattan, or to the Caramoor Center for Music and the Arts in Westchester County, Andrew Armstrong said, he finds himself detouring into his hometown of New Canaan.

His star fast-rising even before graduating from New Canaan High School in 1992, the renowned concert pianist and Worcester, Mass. resident said he drives through town to “go down memory lane” and has felt a strong pull to reconnect with old friends.

A husband and father to three kids and two dogs, Comet and Dooker, Armstrong recently took over as creative director of the Columbia Museum of Art’s “Chamber Music on Main” series in Columbia, S.C. Through it, Armstrong said, he “got to experience firsthand what it’s like to have truly meaningful and deep relationships with music-lovers” in ways that studio work or playing one-off concerts don’t offer.

“You know that old saying, ‘You can never go home again’? I have had this really enjoyable career going around the globe playing music for people. And there’s always a sense, you pop into some beautiful city in Europe or some place in Nebraska, and you get to have this really intimate musical experience where you’re sharing great art with people from 200 years ago, and then you leave town. And I’m more of a nester. And I’ve dreamt for over a decade of building something more long-term and really immersing in my beloved hometown, from first grade through all of high school here in New Canaan. I love this town. It just tugs at my heartstrings the minute I cross the town line.”

What Armstrong envisions is tapping some of the world-class musicians with whom he’s played in his celebrated career, for a five-concert chamber music series throughout the academic year—for example, two installments in September and November, and then three more after the new year, in February, March and April. The concerts would feature music from composers such as Beethoven, Mozart and Brahms, as well as living composers whose music is easily accessible, Armstrong said.

“And it gives us a cadence, where people feel like classical music becomes part of the regular rhythm of their life from time to time, but it’s not saturating what the community might want,” the East School alumnus said. “I am amazed when people say, ‘Well, New Canaan doesn’t have a huge market for chamber music.’ Well, we have to build something really robust and dynamic.”

And one key to doing that is allowing for and forging a meaningful, intimate relationship between musicians and their audience, Armstrong said.

“It has to be a two-way street,” he said. “Our series is not going to be world-class artists coming in, looking down their noses, playing for 90 minutes and telling the audience to just sit quietly and pay for their tickets and then disappear.”

In concerts with up to about 300 attendees, Armstrong said he would introduce each piece of music and talk about who the visiting artists are.

“Our audience is going to know that they are seen, that this is a two-way relationship, that we are reaching out to each other,” he said. “We musicians don’t want to make this music for ourselves in a studio. We have fallen in love with Beethoven sonatas and Brahms quintets, but not for the purpose of playing them in a studio for no one. It’s like when you find a beautiful gem on a beach, and as much as that might give you a great sense of joy and fulfillment, there’s that sense of lacking if you can’t go and share it with someone you love. And so for me to have the chance to share with audiences here in New Canaan would be just an unmitigated gift to me, and I’ll do anything to make it happen.”

Though details of location—facilities such as the Carriage Barn Arts Center, Grace Farms and future New Canaan Library rank as strong candidates, Armstrong said—traffic control, dates and sponsorship are still to be worked out, an inaugural concert could be held as soon as this spring.

“I might eat my words, but I am really confident we can get something ready for May,” he said. “I want to whet the appetite and for people to experience [this] in person. You’ve got to come to the concert. There is no way for us to talk about what this experience is like. People have got to show up and bring their friends.”

Live music has become an increasingly regular part of life in New Canaan, with local bands playing restaurants downtown, fundraisers and community events, and small concerts across all genres hosted at the Carriage Barn and library bolstering the long-popular and well-established Summer Concert Series at Waveny.

Town resident Phil Williams, a musician who plays with a local band, arranges for other performances at community events and owns New Canaan Music on Main Street, said demand at the store for lessons on woodwind instruments has tripled since they began.

“There is a group of people who are very appreciative and would be into it,” Williams said of the proposed concert series

He added, “If it’s here, people will go to it. The fact that he [Armstrong] is making an effort to do this and be here in New Canaan and do it, I think it can only grow. I think there’s a solid enough base to build upon.”

Hilary Whitman of the Carriage Barn Arts Center said the organization hosts a chamber ensemble that brings about 100 people to its concerts, and a free community concert in the spring featuring a string quartet draws about 50.

“It sounds exciting, and I do think there’s an audience in New Canaan and the surrounding towns,” Whitman said of Armstrong’s idea.

Lisa Oldham, executive director of New Canaan Library, said after speaking with Armstrong that the planned 300-seat auditorium is “the right size” for a chamber series.

“The plans call for the space being very well-equipped for musical performance and the library, as everybody has seen over last few years, is very committed to informational and cultural presentations,” Oldham said.

Asked about the prospect of holding concerts on the planned town green, a central piece of the library’s rebuilding plans, Oldham said it “will be a wonderful space for people to experience musical performance.”

Asked whether he envisions free or paid concerts, Armstrong said that’s a particular that still must be worked out, adding, “I’ll say something on either side of the equation.”

“For one, a classic music or chamber music series, it’s just not part of the model, generally, for ticket sales, where ticket sales cover the cost of the players coming in,” he said. “We will rely on people to help us financially to sponsor up front and to make the vision for the community possible—people that believe in the community and believe that this will be good for the community. On the other side of the equation, I will say, you just can’t find a better bang for the buck than chamber music. You can have world-class players from around the globe here for a surprisingly affordable cost.”

The long-term vision is to create something that becomes “New Canaan fabric, indefinitely into the future.”

“Forever, if we can,” he said. “I think there’s  such an incredible opportunity there because a lot of people in Fairfield County who love chamber music, I think the feeling is well we can go into New York City for a concert. So I think there’s room for a truly great chamber music series here in New Canaan that would be the crown jewel of chamber music in Fairfield County. And the thing that is so important is, when people say, ‘Well, we can go into New York City and hear a concert,’ that’s very different from building community here… Really having people from the community unplug from the Internet and unplug from all their electrical devices and have a glass of wine together and chat for a few minutes before we sit down, and evoke the voice of a composer from 200, 250 years ago and intimately share that real, meaningful experience.”

Those interested in helping to organize or operate the concert series, or seeking to be kept abreast of progress with upcoming dates and information, should email Andrew Armstrong at tandrewarmstrong@gmail.com.