Softball officials ousted a New Canaan girl from a state Little League tournament Tuesday after it emerged that she was too young to qualify officially for 11- and 12-year-old division play. 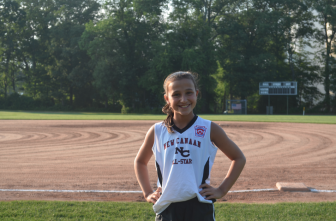 Carolina Welch dressed for the game and cheered on her teammates from the bench during Game 2, a 29-12 New Canaan win over rival Darien in a Little League State Tournament. Credit: Sophia Welch

Hours after Carolina Welch, 10, helped lead the New Canaan 12-and-under All Stars to a 13-6 win at Waveny Park against rival Darien, the rising Saxe Middle School sixth-grader received the news that the game itself (where she pitched four dominant innings) would be forfeited as a loss, and that she would be ineligible for the rest of the tournament.

“I’m upset because I’ve always played in the summer, so now I don’t get to play in the summer on a team,” Carolina (or ‘Lina,’ as she’s known) said Wednesday evening from the sidelines at Waveny’s Orchard Field, as her teammates battled Darien in this best-of-3 round. 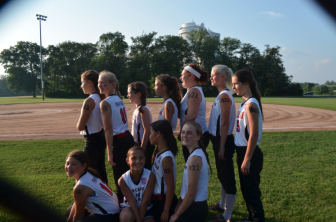 As a show of support for Carolina Welch, the girls had her #22 drawn on their left shoulders in marker, with the Roman numeral X, or 10, for Welch’s age, drawn on their right. Credit: Sophia Welch

The girls had her uniform number 22 drawn in marker on one shoulder, and ‘X’ the Roman numeral for 10 (Lina’s age) on the other.

The “Majors” division in which Carolina plays admits 10- to 12-year-old girls for regular season play, but for Little League-sanctioned state tournaments such as the one that started this week, according to the Williamsport, Pa.-based organization’s rules, only 11- and 12-year-old girls can play in this division.

New Canaan couldn’t gather enough girls to field a 9- and 10-year-old team this summer, and that’s part of what has been frustrating to head coach Rob Moore. He also said the spirit of the rule is to prevent players who are too old to play in a certain division from “aging down”—for example, so that a 15-year-old isn’t playing in the 11 and 12’s division. 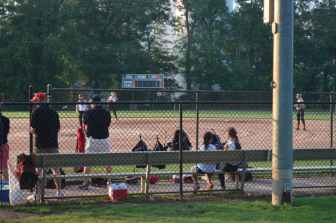 The New Canaan 12-and-under All Stars jumped out to an early lead on Darien in the state tournament Game 2, winning eventually by a 29-12 final. Credit: Sophia Welch

“To the letter of the law, they [members of the Tournament Committee] are right, but I think it’s ridiculous,” Moore said.

Saying the Tournament Committee is “black and white” in its interpretation and application of the rules, Moore noted that he had listed Carolina as 10 years old on the original paper work that must be submitted to tournament officials prior to all games. The “affidavit,” as the document is known, includes dates of birth and proof of residency, among other required data, and Carolina herself had played all season on this same team. (Carolina herself told NewCanaanite.com that it has helped her improve to play with girls who are a bit older.)

Moore submitted an appeal of the decision but was turned down and told his team had to forfeit the first game. Instead of a 13-6 victory, all of New Canaan’s runs were nullified, so that game officially shows up as a 0-6 loss to Darien. 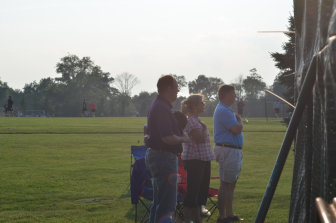 Carolina’s mom, Nancy Welch, told NewCanaanite.com that her daughter—an especially strong player for her age, and a pitcher at that—has undergone unusually close scrutiny when playing against Darien in the past.

Last year in regular spring Little League softball, Welch said, a Darien coach accused Carolina of playing on multiple teams and sought specifics on an “inning count” of how many innings she had pitched for New Canaan to that point in the season—a consideration in Little League play.

“She [Carolina] feels bad because this has happened twice now,” Welch added. “It was under different circumstances but it’s very odd.”

Perry Pierce, district administrator for Connecticut District 1 (which runs from Greenwich to Norwalk and then up to Ridgefield), said the rules state clearly that 10-year-old girls cannot participate in tournaments such as the 12-and-under Majors Little League tourney. A waiver may have been filed ahead of time with the Tournament Committee in order to attempt to get Carolina on the New Canaan roster, but that likely would have been rejected because it wouldn’t have resulted from a hardship where not enough 11- and 12-year-old girls could be found to play on the team.

“Very simply, Carolina is not a Little League age-appropriate for the 11- and 12 division,” Pierce said. “That is what it boils down to.”

A Darien resident, Pierce added that even though New Canaan itself couldn’t pull together enough 9- and 10-year-old girls to field a team, that other towns have petitioned the Little League Tournament Committee to pool their players with neighboring communities in order to field a side.

“So they are putting that information on an affidavit and they are certifying that it is true and accurate. And then I review it, and in that process it was not caught that we had somebody who was not of appropriate league age on the paper work.”

Asked who actually flagged Carolina as a 10-year-old, Pierce said: “That would be me.”

“Basically I noticed it, and once any type of issue is flagged to me—be it by another team, a manager, a coach—it is my fiduciary responsibility to call that information into the Tournament Committee, which is what I did. So regardless of the circumstances, when any kind of issue comes up, we are supposed to call the Tournament Committee, because they don’t want the same situation in Connecticut District 1 to be handled differently than Texas District 47.”

Pierce is entering his third summer as district administrator for District 1, a role he describes as “the local proxy for the tournament committee.”

Typically, problems such as this one are flagged before an ineligible player takes the field, he said.

“At least we caught it now and they [New Canaan] have the opportunity to play another game,” he said. “Sometimes when teams advance to the next level and the administrators at the next level recheck all the paper work and find something like this, they catch it then and teams potentially could be disqualified at that point and have to vacate their titles.”

Pierce added that he “felt horribly” that the discrepancy wasn’t caught earlier and that “it turned out the way it did.”

“It’s fortunate that New Canaan still has a chance to play in the tournament. So the other kids on the team, they still get a chance,” he said.