Betsey Fowler along with her children, Mark Fowler and Carrie Fowler Stowe, the family of the iconic wildlife expert and television personality, Jim Fowler, shared that their father passed away on Wednesday, May 8th, peacefully at home at the age of 89, surrounded by his family.  Known to generations as Co-Host and later Host of Mutual of Omaha’s Wild Kingdom, a favorite guest on The Tonight Show Starring Johnny Carson,  and the Wildlife Correspondent on NBC’s Today Show, Jim lived an incredible life as a naturalist and spokesperson for wildlife and the natural world.  Before his television career began, he carried out expeditions to Africa where he lived with the Kalahari Bushmen, and to South America where he conducted ground-breaking research on the Harpy, the world’s largest eagle, and the Andean Condor. 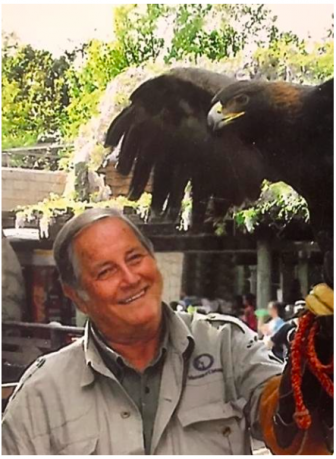 Jim was a member of the world renowned Explorers Club since 1960, and was a recipient of the Club’s highest honor, The Explorers Medal.  Jim grew up on his family’s beloved farm in Albany, Georgia, known as Mud Creek, where he first bonded with nature and, by age eleven, was training birds of prey.  Jim designed and created free roaming wildlife parks in Charleston, South Carolina, and at Chehaw Park in Albany, Georgia with the primary goal of inspiring families to make a connection with the natural world.  His property of 30yrs in New Canaan, Connecticut, became the gateway to what is now a 50 acre land trust preserve called the Silvermine Fowler Preserve for all to enjoy.  One of the most influential personalities in nature programming, Jim inspired millions to care about wildlife and nature and inspired countless zoologists, wildlife educators and other professionals who have dedicated their careers to helping preserve the natural world and the animals and habitat in it.  His impact as a spokesperson for our planet will be felt for generations to come.

Jim’s wife Betsey Fowler is a renowned wildlife artist, his son Mark Fowler is the VP of Wildlife Conservation at the Explorers Club and Nature Initiative Director at Grace Farms CT where he works to save African wildlife from poaching and trafficking, and his daughter Carrie Fowler Stowe is an advocate for the environment who is passionate about the connection between human health and the health of the natural world.  Her husband Doug is an avid outdoorsman and spends as much time as possible in the back country.  Jim’s grandchildren Avery and Brinton have taken on the love of the outdoors and together, they are continuing his legacy by focusing on preserving and protecting the future of wildlife, wilderness and the health of all living things on this planet.

The Fowlers also added that Jim was a Georgia boy at heart who loved being with his family and in recent years, loved driving around in his vintage jeep on his wildlife preserve in Georgia and sitting outside watching birds at his homemade bird feeder while his grandchildren played in the yard. He also recently completed his autobiography called Jim Fowler’s Wild Life (to be released soon), and loved reminiscing about the good old days as he told stories around the campfire with friends and family. Jim was always focused on the big picture of nature and our human relationship to it and always said that how we treat the earth is directly related to our human quality of life and our own future.

Fowler’s wish has always been that all he inspired would continue to advocate for wildlife and the natural world and to get out and explore!

A public celebration will be held in honor of Jim’s life on May 19, 2019 at the Silvermine-Fowler Preserve at 4:30pm

Due to limited parking at the Silvermine property, alternative parking and shuttles will be provided.

Dress attire: Please no black, we will be in the outdoors and would encourage appropriate clothing in honor of Jim’s signature safari bush style.

In lieu of flowers or gifts please feel free to donate to the Jim Fowler Legacy Fund via tax deductible donation to Earthquest (a 501c3) dedicated to Wildlife preservation and education.

[Note: This obituary was published here on the Hoyt Funeral Home website]