After months of planning and “yard work,” a newly designed formal garden at Waveny House is in place and residents say they’re enjoying it. 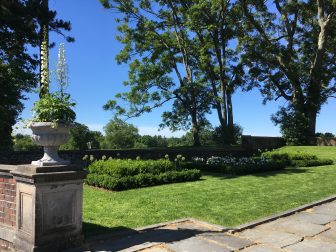 New plantings at the parterre garden, leading down to the mansion’s “Walled Garden”. Credit: Mike Dinan

Those visiting the town park can now use additional benches as they walk through new plantings, boxwoods and shrubbery along the northern wall of the “parterre garden,” just east of the balcony behind the mansion.

“Sitting on the back patio of Waveny and looking down at the parterre, you are transported to England or France,” said New Canaan Garden Club First Vice President Manda Riggs.

New Canaan resident Cassidy Little visited the garden on a recent afternoon and is looking to use it as a backdrop for a photography project. 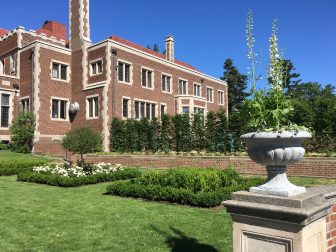 “I’m very familiar with Waveny, I run through its trails almost every day in the fall,” she said. “I think the updated garden really helps to enhance the mansion as a whole.”

New Canaan Garden Club President Ellen Zumbach appreciates the “fresh and new” turnout of the parterre garden and notes that it enhances other Waveny amenities.

“We wanted the updated garden to set a table for the walk down to Waveny’s Walled Garden,” Zumbach said. “It does exactly that.”

Zumbach looks forward to the Waveny Park Conservancy eventually raising the money to renovate the pond, which will further “enhance our hopes and dreams.”

Back in February, the Board of Selectmen approved a pair of contracts that allowed the New Canaan Garden Club and the Waveny Park Conservancy to move forward with the controversial redesign of Waveny’s parterre garden.

The Garden Club’s plan garnered the support of the Waveny Park Conservancy Chairman Bob Seelert as well as Parks & Recreation Commission Chair Sally Campbell. Pushback was ongoing from Keith Simpson Associates which advocated for a historic restoration—yet, the Club ultimately moved forward with their design.

The development of the garden’s design was a process that required time and care, as the Garden Club was careful to respect the original layout of the Olmsted Brothers firm and founding member Antoinette Lapham, officials said.

The garden was donated to the town of New Canaan by the New Canaan Garden Club and a grant from from the Harlan E.and Lois J. Anderson Family Foundation through the Waveny Park Conservancy.

To visit the renovated parterre, walk east of the wide balcony out back of Waveny mansion and continue down toward the walled garden and sledding hill.

[Note: This article has been updated to correctly identify Garden Club members.]