Molly Keshin has hit lots of home runs in her two-and-a-half years with the New Canaan Rams. In fact, the junior catcher’s six homers coming into Friday’s game at Ridgefield High School were the most in program history.

Perhaps none were bigger than number seven. 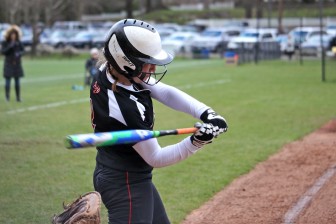 Keshin’s three-run blast in the third inning gave New Canaan a lead it would not relinquish as the Rams picked up a huge 4-3 win over the Tigers. With the win, New Canaan improved to 7-5 overall and 6-3 in a tight FCIAC playoff race. Meanwhile the Tigers, who came into Friday’s contest having won seven of their last eight games, fell to 8-4 and 5-3 in the FCIAC.

“Any win is a huge win,” New Canaan head coach Danielle Simoneau said. “Our record right now with the seven wins is as many as we had all of last year, and I think that puts it in perspective for the girls.”

In addition to Keshin, who went 2-for-2 with three RBI’s, the Rams received a big lift from sophomore pitcher Gillian Kane, who held Ridgefield to five hits and no walks while striking out seven over the full seven innings. Kane also helped herself at the plate, going 3-for-4.

“Gillian did such an amazing job today,” Keshin told NewCanaanite.com. “She hit every one of her spots. Her curveball was so good, her screwball was great. She just shut them down.”

“Without defense, which—knock on wood—has been spectacular, we’re not going to be able to stay in these games,” Simoneau said. “If you don’t have the whole package, you’re not going to come up with the ‘W’.”

New Canaan’s offense was also on its game as the Rams pounded out 10 hits off Ridgefield’s junior hurler Kailey Westington. In addition to Keshin and Kane, junior Rachel Keshin added two hits and two runs, freshman Fahey had a hit and scored a run and juniors Welch and Sulpizi added a hit apiece for the Rams.

Ridgefield struck first as Meagan Hyatt reached on an error to lead off the inning and moved to second on a wild pitch. With two outs, Hyatt came home on a grounder that bounced through the hole between short and third for a 1-0 Tigers lead. 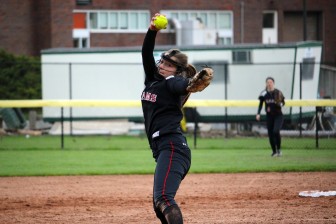 New Canaan countered in the top of the third as Kane led off with a single. After Kara Fahey reached on a fielders choice that forced Kane at second, Rachel Keshin hit a one-out single to right giving the Rams runners at the corners. Molly Keshin then stepped up and launched a 1-0 pitch far out of the outfield’s reach for a no-doubt home run, giving New Canaan a 3-1 lead.

“It felt like I didn’t even hit it,” Keshin said. “I looked up and saw it was going really far, and was like ‘I should probably run’, and I actually almost missed first base.”

“Sophia had a great game,” Simoneau said. “She’s coming off an injury at practice last week, so this was the first time she had swung since then.”

Meanwhile Kane continued to dominate Ridgefield, retiring fifteen of sixteen hitters from the second inning through the sixth. The Tigers finally mounted a threat in the seventh, as two hits and two hit-by-pitches led to a pair of runs, cutting the New Canaan lead to 4-3. Kane struck out Ridgefield’s Ryen Fujitani with the potential tying and winning runs on base to end the game, clinching the win for the Rams who—with victories over 2015 FCIAC playoff teams Stamford, Trumbull, Norwalk and now Ridgefield—find themselves right in the mix for one of eight conference postseason spots.

“It is such an amazing feeling,” Keshin said. “We know that we’re capable of anything and we’re just having fun.”