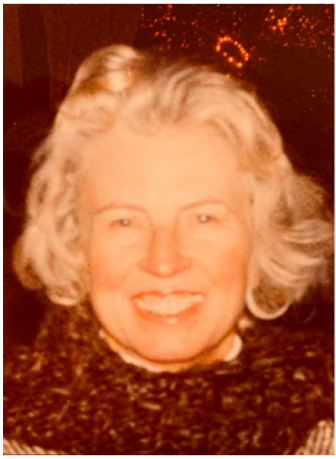 Born and raised in Akron, Ohio, she earned her bachelor’s and master’s degrees at Case Western Reserve University, where she met her future husband, Dan Hutchins, who was attending CWRU on the GI Bill.

Throughout her young life, Mrs. Hutchins held several interesting jobs, the details of which she could recall 70 years later. She wrote obituaries for the Brotherhood of Locomotive Engineers, sold Highlights for Children magazine door-to-door, and during World War II she worked in Washington, D.C. for the Foreign Economic Administration. Married in 1948, after obtaining her master’s degree, she taught fifth grade in the Cleveland Public Schools. She also appeared as a contestant on the 1950s TV game show Tic-Tac-Dough.

In New Canaan, she was active as a room mother at Center School, as a Girl Scout troop leader, and as a Sunday School teacher, and was deeply involved with the New Canaan League of Women Voters for many years as publicity chair. A longtime member of the Roton Point Club in Rowayton, she and her husband served as swim team chairs there in the early 1970s and made a wide circle of good friends from surrounding communities.

After her husband’s death in 1982, she remained in New Canaan, and stayed active in many local organizations, taking tai-chi classes at the Lapham Community Center, and classes at the Temenos Center in Westport. She particularly enjoyed the annual Christmas Luncheon for seniors held at Waveny House.

She was very well-read on a wide range of topics, from finance to psychology to Jung to philosophy to spirituality and traveled to many topical conferences, from Boston to New York to Seattle.

Over the past 20 years, she was a frequent lunch and dinner patron of many local restaurants, particularly Gates, Bluewater Cafe, Le Pain Quotidien, Elm, and South End, and greatly enjoyed talking with the people she met there.

Throughout her life, she happily followed the accomplishments of her two children and then her grandchildren as well.

She was intelligent, conversational, a great story-teller, gifted with a long memory, and alert to the very end.

The family plans to hold a celebration of her life later this year.

In lieu of flowers, please consider making a donation in her memory to Horizons National or the New Canaan Land Trust.