The New Canaan Chamber of Commerce is pleased to announce the addition of eight new members to its Board of Directors as well the creation of a new, dedicated board composed of past chamber presidents that will help oversee the organization’s charitable foundation. 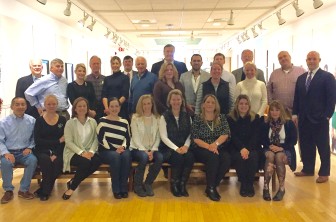 Nimble, engaged and innovative, the new chamber directors form an exciting group of business and organization leaders in town, according to Tucker Murphy, executive director of the chamber.

“Our mission is ‘connecting community with commerce,’ and we kept those four words very much top of mind in putting together this board,” Murphy said. “Our new directors not only represent successful local businesses stories—they’re also deeply involved in our town. Beyond participating in chamber events such as the Sidewalk Sales, Holiday Stroll and Taste of the Town, they actively fundraise for community agencies, volunteer with service organizations and connect with each other for their mutual benefit.”

The newly appointed directors each have started serving a 3-year term, and they are:

Helping to acclimate them are three current directors who now form a new executive committee for the chamber: Steve Risbridger of Reynolds & Rowella is president, Tom Stadler of the Town of New Canaan First Selectman’s Office is treasurer and HamletHub’s Rachel Lampen is secretary.

“Between the insights and experience of our current board members, and all the energy we’re bringing in with our new slate of directors, 2016 promises to be another banner year for the chamber and the businesses we support,” Murphy said.

The chamber also is announcing that a group of its past presidents now form a new board that—together with the executive committee—oversees the organization’s recently launched charitable foundation. The foundation means that those seeking to support cherished town traditions overseen by the chamber—such as the Holiday Lights in the village center—receive a tax deduction for their generosity.