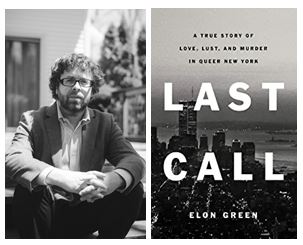 New Canaan Library welcomes journalist Elon Green for a discussion of Last Call: A True Story of Love, Lust, and Murder in Queer New York, his gripping nonfiction book that details the investigations and search for a serial killer preying upon the gay community during the early 1990s. The live webinar will take place on Monday, June 14 at 7 PM EST via videoconference. Please register online at newcanaanlibrary.org for zoom sign in information.

In the 1980s and early 1990s the “Last Call serial killer” preyed upon gay men in the New York area and left their remains in rest areas across three states. In this true crime drama, journalist Elon Green meticulously reports on the investigations by detectives from New York, New Jersey, Pennsylvania, and Maine. He draws on the accounts from friends and family of the victims, lending insight into the victims’ lives and the rise of the LGBTQ community to join with the police to find the killer. This compelling, true crime narrative tells the story of the Last Call Killer and the decades-long chase to find him, as it simultaneously paints a portrait of his victims and documents a vibrant gay community and political actions to expand awareness of violence against the gay community. A “terrific, harrowing, true-crime account of an elusive serial killer who preyed upon gay men in the 1990s.” -The New York Times

Elon Green has written for The New York Times Magazine, The Atlantic, The New Yorker, and The Columbia Journalism Review, and appears in the true-crime anthology Unspeakable Acts. He has been an editor at Longform since 2011.