A New Canaan man through a limited liability company he controls has spent about $3.7 million in 2016 to acquire 10 of the Heritage Hill Road condominiums, as well as four garage units there, land records show. 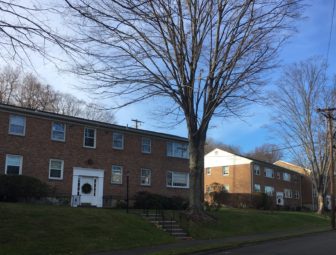 Thomas Hudson of West Road, identified as a financier and former hedge fund manager in national news stories about him, is principal of Captain Jack LLC, according to records on file with the Connecticut Secretary of the State.

Through Captain Jack—Hudson has been described as a pirate enthusiast—he acquired the following units at the ‘Oenoke Apartments Condominium’:

It isn’t clear whether the purchases represent a straight real estate investment—single-level units close to the downtown are in demand, officials say—or if something more involved is planned for the 1960s- and ‘70s-built complex.

Hudson could not be reached for comment. A local attorney who has handled the property transfers for him—Michael Murray of Ivey, Barnum & O’Mara LLC—said “No comment” when reached by NewCanaanite.com. The head of the Oenoke Association, a homeowners’ group at the condos, also declined to comment on the matter.

Hudson is founder of the hedge fund ‘Pirate Capital LLC,’ according to multiple news articles that appeared in the New York Times and other national publications. The company employed pirate imagery and used the term “surrender the booty” in activist investor dealings, one article said. According to a 2014 Wall Street Journal article, Hudson also had been owner of a pirate-themed estate on St. Thomas that he named ‘Villa Whydah’ after a sunken 18th-century pirate ship near his childhood home.

It could be that ‘Captain Jack LLC’ refers to Johnny Depp’s character, Capt. Jack Sparrow, in the “Pirates of the Caribbean” film series. There also is a Billy Joel’s “Captain Jack” (see video below), though the reference there appears to be to substances—perhaps Jack Daniels whiskey—and the song itself describes a feckless 21-year-old whose mother still makes his bed.

In 2008, Billy Joel commemorated the closing of the New York Mets stadium, Shea Stadium, with a legendary two-night concert of his top tracks as well as amazing guest performances. Watch here as Billy and his band perform ‘Captain Jack’ off the 1973 album Piano Man.