Recently inducted into the United States Lacrosse Connecticut Hall of Fame as well as the Brown University Sports Hall of Fame, Andy Towers had an illustrious career as a player. 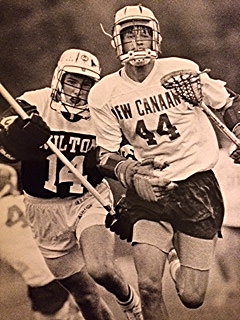 A 1987 graduate of New Canaan High School, Towers played both varsity basketball and lacrosse for Hall of Fame coaches Don Usher and Howard Benedict. As a lacrosse player, he helped the Rams win three straight CT State Championships, earning high school All-American honors as a junior. In 1988, Towers played for the 19 & Under USA Team that won the World Championship in Adelaide, Australia.

Towers graduated with both the single-season and career goal scoring records. The career mark stood up until this past spring until it was broken by 2016 Tewaaraton Award winner, Dylan Malloy.

As a Division 1 College Coach, Towers held head coaching positions at Dartmouth College (2009-2014) and at the University of Hartford (2003). He also has assistant coaching stints at Yale, Brown and Fairfield in the mid-late 1990’s.

Currently, Towers resides in New Canaan with his wife of 16 years Carlene, his daughter Tyler 13, son James 9, and their dog, Franc. He works selling diamonds for Elemetal Diamonds based out of NYC and owns/runs Lacrosse Draws, a company committed to moving the game of lacrosse forward for boys and girls at the youth and high school levels through individual and small group player development camps and clinics.