The owner and operator of a commercial nursery on Frogtown Road have violated the terms of a 1984 agreement by storing materials on the site expressly excluded in it, town officials said last week. 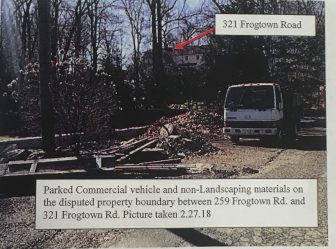 The town requires property owner Twin Ponds LLC and Frogtown Nurseries to “remove such unrelated nursery materials, including cement blocks, located on the disputed property between 321 and 259 Frogtown Road,” according to a March 14 letter to the business from New Canaan’s interim town planner.

Interim Town Planner Keisha Fink’s letter comes amid a bitter, years-long and ongoing legal dispute between the nursery and three contiguous homeowners next door. That legal matter centers, in part, on the question of whether the nursery had made “continuous and uninterrupted” use of areas near its shared property line for a statutory period of 15 years that would then give the business certain rights to it, such as installing deer fencing. 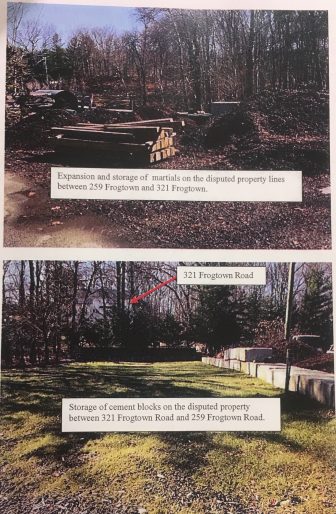 Last summer, the neighbors complained that the town had failed to address adequately their several concerns by not yet taking enforcement action.

Fink in her letter cites an Oct. 9, 1984 agreement between the New Canaan Planning & Zoning Department and the owner-operators of the nursery at the time, then known as Kimberly Farms Nursery.

Under one provision of that agreement: “No nonconforming use, and no portion of a building containing a nonconforming use shall be extended or expanded unless such extension or expansion receives approval of a Special Permit by the [P&Z] commission.”

Under another provision: “Other materials not related to a nursery business such as building materials, bricks, flagstone, sand, firewood and top soil shall not be allowed on the property.”

Fink during a Feb. 27 site visit said Frogtown Nurseries appeared to have “expanded the nonconforming use of a nursery located in the two-acre residential zone and has violated the Stipulated Agreement,” according to her letter. She provided photos and noted that in them, “the parking of a commercial vehicle and storage of landscaping materials were evident and located on the disputed property boundary between 259 Frogtown Road and 321 Frogtown Road.”