Saying the redeveloped Maples Inn property already is well over coverage, town officials on Monday denied a request from the owner of a longstanding cottage there to enclose a patio out back. 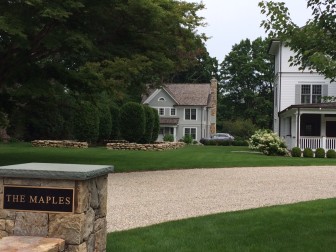 At left, the cottage of the Maples Inn property. Credit: Michael Dinan

Property owner Harriet Plavoukos needed variances to three sections of the New Canaan Zoning Regulations in order to enclose the existing patio, which would add 320 square feet of coverage and is located 20.6 feet from the side property line in lieu of the required 25 feet.

Zoning Board of Appeals member John Mahoney told the applicant during the group’s regular monthly meeting that though he understood the building was sited very close to the property line shared by the Roger Sherman Inn and also that the structure itself predates existing zoning regulations, “How is the desire to enclose that patio not a self created hardship versus the property itself is already well over and probably always has been? How is this not a self-created hardship?”

Noting that the total allowable coverage for the former Maples Inn lot if it were a single-family home would be 4,500 square feet and that as of now some 9,200 square feet of buildings are on the property (mostly in seven condominium units), Mahoney added: “So the coverage has gone in a direction away from even the original building there in terms of growing and now it’s going to grow further.”

“I understand in terms of the setback, but I am struggling a little bit with why this is not a self-created hardship,” Mahoney said at the meeting, held in the Sturgess Room at the New Canaan Nature Center. “In some cases we have things where the building is against the street so anything you are going to do to the property is inside a setback. This is a property that has been expanded, renovated, completely redone, unit sold as-is.”

The ZBA voted 3-2 in favor a motion to approve the requested variances on condition that the former cottage not seek in the future to expand its coverage (four “Yes” votes are needed for approval from the board—Mahoney and ZBA Chairman Carroll Yanicelli voted “No”).

Attorney David Rucci, representing the applicant, said the main reason for the request was to make the patio usable. It’s become more difficult for the occupants of the cottage to use the patio in the warmer months with the neighboring Roger Sherman Inn its outdoor activities. Rucci emphasized that because the overall property is so far over coverage, any individual request related to building will require a variance. He also noted that the condo association board approved the proposal for the patio enclosure.

Board members asked whether the applicant intended to increase the size of the patio (No), whether the Roger Sherman Inn had been notified of the proposal (Yes but didn’t respond) and whether the cottage saw any changes during the Maples Inn rebuild (not to the exterior or footprint).

The cottage itself is known today as the Cottage Unit on the former Maples Inn site. This unit was an original rentable residence when the Maples Inn was in operation. After the Inn was sold, the Cottage was completely renovated in the current location along the Northern Property line up against the Roger Sherman Inn property. It’s part of the Maples Condominium Association.

ZBA member Laura Edmonds pointed out that the patio itself will not increase the footprint of structures on the property, since the owner is not building a new patio but rather “just enclosing it in.”

Yanicelli replied: “It is worse, instead of a patio it is an enclosed unit.” She added that the ZBA in granting variances originally for the development of the Maples Inn property into condos—even over the objections of some neighbors—did not anticipate anyone on the parcel asking for an increase in coverage.

“To expand it on that side, I have a problem with that,” Yanicelli said.

Rucci responded that the proposed enclosure is a single-story, all glass and that “it’s not something that’s going to appear to bother any of the neighbors, at least the ones we have spoken with.”

Invoking the possibility that the Roger Sherman Inn property could be sold and a development proposed, Rucci added that the ZBA “may be seeing something like that come around again with properties that are in that neighborhood.”