Saying a residential street in New Canaan has become a popular detour for Merritt Parkway motorists who zip along it, police said Tuesday that they’re taking steps to slow down the traffic. 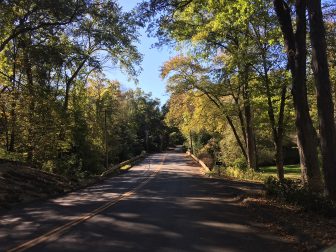 Speed sentry data on Marvin Ridge Road a “high increase of traffic” traveling westbound from about 7 to 9 a.m. and again going eastbound from about 3 to 4 p.m., according to New Canaan Police Capt. John DiFederico. Many drivers are traveling the 25 mph road at 35 mph, “so we are going to put the speed sentries out there again next week,” DiFederico said during a meeting of the Traffic Calming Work Group. The group, which includes members of the Fire, Police, Emergency Management and Public Works Departments, fields requests for traffic calming and makes recommendations to the appropriate municipal agency.

DiFederico said he has called on police patrol shifts to boost enforcement during peak times and added that it’s possible the town will install a ‘Bus Stop Ahead’ sign on the street.

“We are going to work on slowing traffic down on Nursery Road,” DiFederico said.

The plan follows a petition filed Monday with town officials by six residents of Nursery Road.

Running east-west and roughly parallel to the Merritt Parkway for about a half-mile between Marvin Ridge and White Oak Shade Roads, Nursery Road includes 20-plus homes, according to tax records.

In their petition, the residents call what’s happening on Nursery Road “a major road traffic issue” where “there are numerous drivers speeding at 45-55 mph” during the morning rush, creating an “ongoing danger to the life and safety of all residents on the street, especially young students who take the elementary and middle school buses.”

“The road has limited visibility in its three curves, creating a danger to cross the road for the school bus stop or even enter the road from our driveways,” the petition says.

It continues: “Several of the residents have already had close calls with cars driven at speeds twice the legal limit. At least one pet has been killed as a result of the dangerous traffic. We are concerned that it is only a matter of time before a serious accident happens on our road. We keep finding ourselves in numbers potential accident situations on a daily basis due to constant speeding and lack of visibility in the curved sections of the road.”

Though definitive information was not immediately available, DiFederico said the 85th percentile of motorists on Nursery Road—the data point used by traffic officials in determining whether people are speeding—was about 35 mph in a 25 mph zone. Yet with a few outliers traveling even faster—say, 45 mph—in a short two-hour window means that residents on Nursery are experiencing even speedier traffic.

The drivers most likely are finding Nursery Road through apps that are detouring motorists around the often stop-and-go Merritt Parkway traffic, DiFederico said.

“It is easier for people to detour around and the traffic data is proving that is true,” he said.

One thought on “Police Vow To Slow Traffic on Nursery Road, a Popular Detour for Merritt Parkway Motorists”