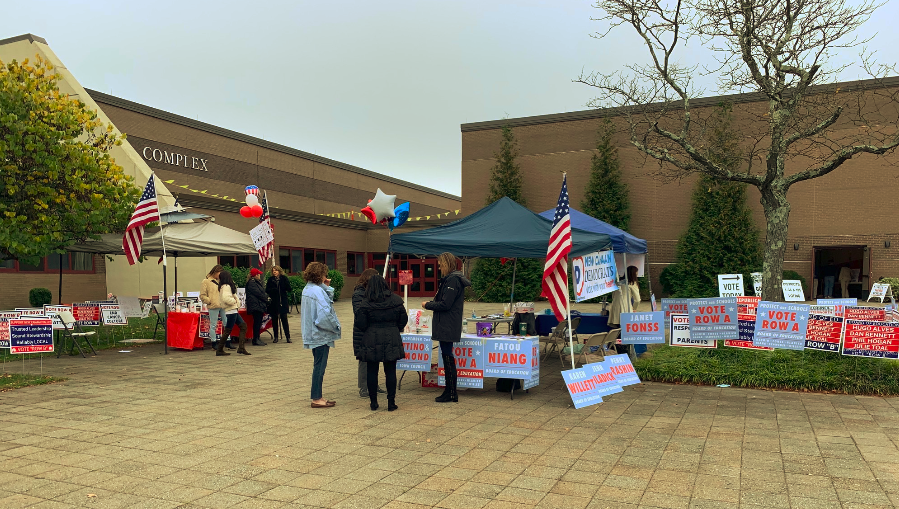 The polling place at New Canaan High School on Nov. 2, 2021. Photo published with the permission of its owner

A poll worker was removed from the polling place at New Canaan High School Tuesday morning following reports that she’d been instructing people on how to vote, officials say.

The volunteer poll worker had been standing near the sign-in table at NCHS telling electors to “only vote for four” candidates, according to Alyssa MacKenzie, vice chair of the New Canaan Democratic Town Committee.

MacKenzie identified the poll worker as Allison Totaro. She was reassigned within the polling place at about 11:48 a.m., MacKenzie said.

This year’s most closely followed contested race is for the New Canaan Board of Education, where six seats are up for election, including five four-year terms and one two-year term.

Four of the six seats currently are held by Republicans, two by Democrats.

The GOP has four candidates on the ballot, while the Democrats have six.

Totaro is a registered Republican, according to Connecticut Secretary of the State records.

Some of the candidates for elected office who were campaigning outside NCHS looked into the matter themselves based on the first reports of Totaro’s instructions to voters, MacKenzie said. They then notified the moderator, who asked Totaro to leave, which she did, MacKenzie said.

It wasn’t immediately clear whether or how the situation will affect the ability of election officials to call the contested races today. Polls close at 8 p.m.

Reached by NewCanaanite.com, the Democratic registrar of voters, John Amarilios, declined to comment, saying the matter is being looked into. His Republican counterpart, Registrar of Voters Joan McLaughlin, could not immediately be reached for comment.

New Canaan has two polling places, one at NCHS and one at Saxe Middle School.

Selectmen Nick Williams at 5:41 p.m. Tuesday emailed the following statement to NewCanaanite.com, saying it was attributable to RTC Chair Pat Donovan. Donovan was not copied on the email. This news outlet reached out to Donovan for confirmation. Donovan at 7:13 p.m. contacted the New Canaanite asking the statement be attributed not to him but to the RTC in general:

“New Canaan Democrat allegations of poll worker irregularity is at worst an attempt to steal the election, or at very least to cast doubt on the results. New Canaan Democrats have accused a volunteer greeter at the polls, who was merely giving instructions, of trying to sway voters. This accusation is categorically false, as stated by Elizabeth Orteig, the New Canaan DTC’s own Treasurer, James Walsh, the Moderator of the District 3 polling station, and other workers at the poll. No such instructions were given beyond the technicalities of the somewhat complicated ballot – as other poll workers were doing today.  The reasoning for the instructions were that this morning 36 ballots were invalidated because voters voted for too many candidates for the Board of Education. As a result of these false allegations, approximately 1,200 ballots at New Canaan High School have been improperly “segregated”,  which is a gross violation of election procedure and CT election law. No ballots are to be segregated or tampered in any way during voting hours; sanctity of the ballot and chain of possession are essential to the electoral process. The New Canaan RTC has contacted the Connecticut State Elections Enforcement Commission and alerted that office of the RTC’s intention to file a complaint.”

[NewCanaanite.com has updated this article with clarifying information from the DTC regarding the poll worker’s reassignment within the polling place.]