Zoning officials on Monday will hear from a Ponus Ridge homeowner seeking to remodel partly and build a two-story addition to their antique house that would include a new master bedroom.

A rendering of the home at 394 Ponus Ridge with the proposed addition (which is around back of the house). A front porch would be rebuilt.

The owners of 394 Ponus Ridge, between Ponus Ridge Chapel and corner of Davenport Ridge Road, are seeking a variance to the required 45-foot front yard setback for reconstruction of an existing screened porch and to build an addition to their ca. 1840 home to accommodate their family’s burgeoning interests and activities while preserving the character of their home and changing minimally its appearance from the street. The current zoning regulations would put the front yard setback more than halfway into the house itself, they say.

Reached by NewCanaanite.com, Brendan Hayes said that the family’s goal is to maintain and respect the historic nature of the house and property. 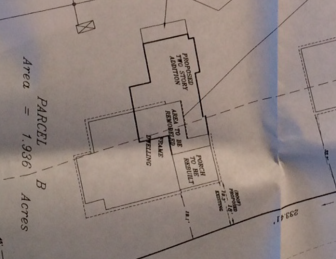 “Because of the way the house was built on the property before the setback—and the way the addition is situated, it doesn’t really change the front of the house at all—it’s just so close to the street that it’s almost impossible not to build in the setback,” he said.

Houses built in the 18th and 19th Centuries typically were situated right on top of the road.

Plans call for some additional spaces, such as for a mudroom placed near what has become the family’s most-used entrance to the house, as well as a large kitchen placed more appropriately next to the dining room.

The application will come before the Zoning Board of Appeals at its 7 p.m. Monday meeting in the Douglass Room of Lapham Community Center. 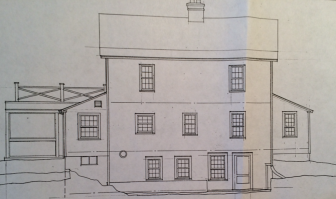 The addition (I think) is what is sketched on the left side of this drawing, and would not face the street.

Town officials last week received one letter of support for the project, from next-door neighbor Sheila Rosenthal of Davenport Ridge Road, who said: “I think their plan would be tasteful and much needed to accommodate today’s lifestyle.”

In a letter to the ZBA, the Hayeses said that older farmhouses such as theirs are “notorious for having tiny or no closets in the bedrooms” and that the new bedroom addition would be toward the rear of the home.

“We intend to live in our home for many years,” they said.

“We love our property with its antique barn and established trees and gardens, and we love New Canaan,” the Hayeses add in the letter.

Brendan Hayes said that although town tax records put the original construction date of their home at 1759, that the family has had experts in to examine the structure, and they’ve found the date to be somewhere between 1820 and 1840.

Here’s where 394 Ponus Ridge is located: