The hopeful developer of the Roger Sherman property on Monday filed a new application with the town that would replace the 11,341-square-foot restaurant and inn with six dwellings totaling nearly 17,000 square feet of living space. 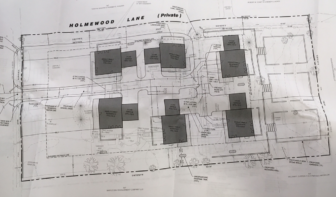 A look at the new site plan for the Roger Sherman Inn at 195 Oenoke Ridge Road.

According to Andrew Glazer of Norwalk-based Glazer Group, the change would bring the 1.8-acre lot at 195 Oenoke Ridge Road into greater conformance with the New Canaan Zoning Regulations, because its use would shift from commercial to residential.

Normally—that is, without special approval from the Planning & Zoning Commission—a parcel of that size in that zone could accommodate a single home, under the existing regulations.

To make the project possible, Westport-based engineering firm Landtech on Glazer’s behalf has proposed an entirely new “overlay district.” The stated purpose of the proposed “Non-Conforming Residential Overlay District” is “to create the opportunity to eliminate a pre-existing non-conforming use located within the residential zones of New Canaan.”

The newly submitted application includes an October traffic study whose findings appear to be based on seven—rather than six—total dwellings on the property. Originally, Glazer had applied for eight total units, which had become seven by the time an initial public hearing was held in October.

At that hearing, an attorney representing six neighbors of the inn, on Holmewood and Hampton Lanes, urged P&Z to consider carefuly and reject the high number of homes proposed for the site.

At its most recent monthly meeting, the nonprofit New Canaan Preservation Alliance’s board of directors unanimously approved a resolution stating that the organization “strongly opposes re-zoning of the Roger Sherman Inn property to allow increased density residential housing.
“We believe approving this request would set a zoning precedent that would adversely alter the established historic character, density and scale of our community,” the resolution said.

Glazer’s re-filing came on the same day that the Roger Sherman Inn’s owners announced that they would close the business Jan. 2.

According to tax records, the oldest part of the Roger Sherman dates to the mid-18th century.

The would-be developer is seeking to “retain a portion of the existing house” that houses the current restaurant and inn with an eye on renovating the façade of the building. Its interior would be renovated to create a single-family dwelling, according to the new application, while five additional 2.5-story detached dwellings with about 2,800 square feet of living space and 2-car garages.

A proposed 16-foot-wide driveway would come off of Oenoke and also provide access to what presumably is Holmewood Lane—called ‘Homeward Lane’ in the application—to the north.

“Much of the landscape will mimic the selection of trees and shrubs that were used on the Maples Inn project next door which have flourished since being planted. In addition, we are creating approximately one-third of an acre of formal gardens along the northerly property line that can be enjoyed by residents as passive open space.”

It continued: “Our project will be served by municipal sanitary sewers, public water, onside storm water drainage has been introduced to collect storm water runoff from the developed site. Our application will include a traffic report that will demonstrate that traffic from our new residential project will greatly diminish the traffic impacts to the neighborhood from the current restaurant and inn uses.”