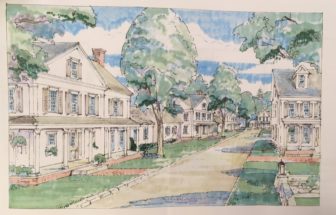 Filed by Norwalk-based Glazer Group on behalf of the property’s owners, plans call for a portion of the longstanding, historic structure—at least part of it dates to 1740, tax records show—to be razed while what remains would be converted into one of the eight new units. The other seven 2-story detached dwellings would include about 2,800 square feet of living space with 2-car attached garages, the application said. 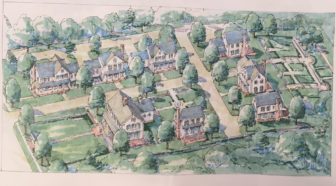 About “75 percent of the existing structure that currently houses the restaurant and inn” would be retained, it said.

“The intent is to rehabilitate and renovate the façade of the building so that the look and feel from Oenoke Ridge would remain similar to the existing. The interior would of course also be renovated to create a single-family dwelling.” 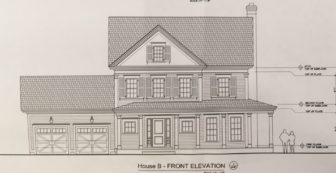 The filing also appears to propose text changes to the New Canaan Zoning Regulations in order to make possible the property’s conversion from a pre-existing non-conforming commercial use to a residential use, though it wasn’t immediately clear from the publicly viewable file at Planning & Zoning just what new language would be introduced. (The filing itself appears to be a partial application, for example, it said, “Our application will include …” in one section—see below.) 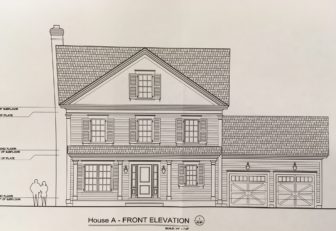 “In order to create this new residential use we are proposing to amend a portion of the text within the Residential Zone under the Special Permit ‘other uses’ section 3.2 and sections 3.7E ‘Exceptions for building coverage’ and section 3.7F ‘Maximum density exception,’ ” the application said.

It refers to sections of the regs (see pages 69 and 70 of the New Canaan Zoning Regulations here) under which applicants may put in for a special permit that would allow them to exceed what normally is allowed in terms of coverage. It is unclear whether what is proposed for the Roger Sherman requires even more coverage than the excesses currently allowed by special permit. 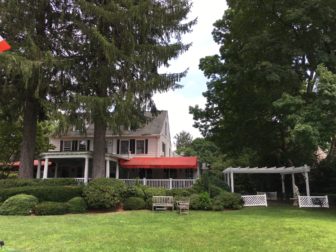 A stately holdout from a more rural era for New Canaan, the Roger Sherman has been under wide speculation since it hit the market at $6 million two years ago.

It’s owned by a limited liability company whose principal is Joseph Jaffre of Heritage Hill Road and whose agent is Nesreen Jaffre of Ridgefield, according to tax records and records on file with the Connecticut Secretary of the State. They bought it for $3,415,000 eight years ago, records show.

According to the filing, the president of Glazer Group, Andrew Glazer, “negotiated the purchase of the Roger Sherman Inn with the intent of creating a similar residential setting” to the Maples Inn next door and Silvermine Tavern Inn.

The Roger Sherman occupies a special place in the hearts of many—it is not only a restaurant and inn that offers live music, but also stands as a reminder of when New Canaan was a weekend and summer destination for New Yorkers seeking a break from the hustle and bustle of the city. The inn in recent years has also served as a meeting place for venerable local groups such as the Rotary Club of New Canaan, and is a popular special occasions destination for locals such as on Valentine’s Day and, recently, for pre-Senior Prom photos.

The application points to New Canaan’s bustling restaurant scene as a reason for the Roger Sherman “experiencing a downturn in business” and lingering on the market.

It wasn’t immediately clear whether the Jaffres have received builders’ offers that include the redevelopment of the Roger Sherman site while continuing the venerable structure as a restaurant and inn. They could not be reached for comment.

According to the application, the proposal for the site “includes a robust landscaping plan combining deciduous and evergreen trees buffering the adjacent properties.”

“Much of the landscape will mimic the selection of trees and shrubs that were used on the Maples Inn project next door which have flourished since being planted. In addition, we are creating approximately one-third of an acre of formal gardens along the northerly property line that can be enjoyed by residents as passive open space.”

The application notes that the project “will be served by municipal sanitary sewers, public water, onsite storm water drainage has been introduced to collect storm water runoff from the developed site.”

“Our application will include a traffic report that will demonstrate that traffic from our new residential project will greatly diminish the traffic impacts to the neighborhood from the current restaurant and inn uses.”