For the better part of the 20th Century to the present-day, Morse Court has been a busy, filled-to-capacity parking lot by day and teen hangout by night. Despite the large amount of people who use it in some capacity, it’s safe to assume that most are unaware of the New Canaan landmark, which once occupied the site: the late, great Birdsall House.

In the early-to-mid 19th century, historians say, New Canaan was a popular summer destination for wealthy New Yorkers, seeking the fresh air, peace and quiet— leisurely lifestyle that “The Next Station to Heaven” provided. One such summer transplant was Gilbert Birdsall, vice president of the Third Avenue Railroad in Manhattan. Birdsall owned a house on Canoe Hill Road and also purchased the burgeoning New Canaan Hotel on Main Street, a popular destination for out-of-town businessmen and travelers alike. 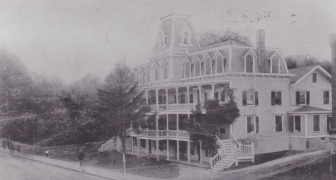 Once the residence of Stephen Hoyt’s son-in-law Bradley Keeler, the hotel took shape with a large addition to the original structure, replete with a double-decked balcony, dormer windows and a distinctive Victorian cupola. When Birdsall retired from his position in New York City, he became a full-time New Canaanite, and assumed the managerial duties of his downtown property, eventually dubbed the Birdsall House.

One of several New Canaan inns accommodating visitors throughout the late 1800’s, the Birdsall House was the largest and one of the most popular, due to its proximity to downtown. The three-story hotel also featured a ballroom on the top floor, a saloon on street level, and a billiard room—high entertainment in those days. 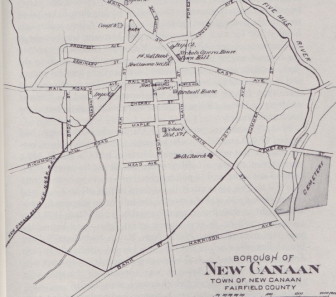 As New Canaan eventually evolved from a tourist destination into a permanent residential community, so too did the functionality of the Birdsall House. It was converted into apartments in 1917, but its distinctive building continued to be a downtown New Canaan landmark well into the 20th Century, historians say. New Canaan native Carol Cantrell Naylor, a young girl in the 1940s, remembers the towering structure from her after-school walk.

“My aunt, Elizabeth Raymond, worked at the library, so sometimes I’d walk from Center School to meet my mother there,” Naylor told NewCanaanite.com. “I remember my mother telling me it used to be a hotel and that the wealthy people from New York City would come out in the summer and stay there, to beat the heat of the city.”

Gilbert Birdsall’s family continued to run the hotel for two generations. His granddaughter, Mrs. Robert B. Morse lived in the Birdsall house where her husband took an office as headquarters for his real estate and insurance business. 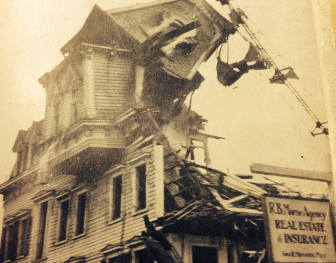 Eventually the same thing that made the Birdsall House so popular contributed to its demise. A need for downtown parking in the postwar years loomed and properties such as the Birdsall became expendable. Condemned as a firetrap, the old wooden building was demolished under the watch of the R.B. Morse Real Estate Agency in July of 1950. “Parking Is No Problem Now” claimed town planners as they unveiled the resulting 180-spot public lot, which retains the name Morse Court to this day. There is no mention of the landmark building that occupied the site for so many years.

“I only remember the building itself,” Carol Cantrell Naylor said. “I thought it was very beautiful.”