The grand, historic Roger Sherman Inn, a touchstone for New Canaanites and an enduring holdout from a bygone era of the town, has hit the market at $6 million, according to an online listing with Halstead. 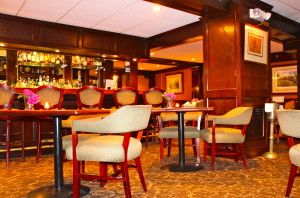 Though rumors have circulated in New Canaan for several months about a possible sale of the venerable inn, the official listing date for the property is Aug. 23, according to Trulia.

The 1.8-acre lot last was purchased six years ago for $3.4 million, according to its tax card. It is owned by Jaffre Real Estate LLC, a company whose principal, according to the Connecticut Secretary of the State, is Joseph Jaffre of New Canaan. He could not immediately be reached for comment.

The listing says: “Dating back to 1925, The Roger Sherman Inn has served the Town of New Canaan for nearly 100 years as not only a fine dining restaurant, but also the town’s infamous Bed & Breakfast historical landmark.” 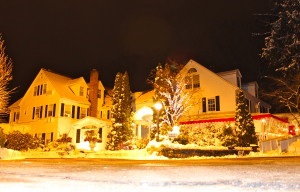 Its tax card says the structure at 195 Oenoke Ridge—more than 11,000 square feet now, after several additions through the decades—dates to 1740. According to local historians, the property that would include what was known as the Holmewood Inn long before its current name, had a house on it as early as 1783. That was the private home of the Congregational Church’s fourth-ever minister, a man named Justus Mitchell—a nephew by marriage of Roger Sherman, signer of the Declaration of Independence.

According to an article titled “The Holmewood/Roger Sherman Inn” by Janette M. Shea and Stefan Zur in an annual of the member-supported New Canaan Historical Society, after a few new owners, in 1898, a man named William E. Bond purchased the property that included the former Mitchell house and created a larger structure that his family lived in “and which is now the inn’s main building.”

In 1925, cottages were added to the property and under yet another owner, the Tebbetts family, The Holmewood opened that fall as an inn as well as a school (short-lived). It wasn’t until 1960, when the inn was purchased by one Roger Sherman Ross of Upper Montclair, N.J.—“a direct descendant of the Signer,” the article says—that it took up its current name.