The pending demolition of the Mead Park Brick Barn has drawn polarizing reactions from the community—while preservationists advocate for its historical and cultural value, at least some of those who favor its razing live in the long-vacant building’s immediate area. 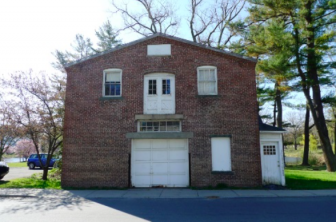 Amy Wilkinson lives in the townhouse off of Richmond Hill, and said she is “very much anticipating the demolition of the structure” and is “very happy it is finally going to happen.

The building is “an eyesore” for residents and “doesn’t have a particular function and it hasn’t for a long time,” she told NewCanaanite on a recent afternoon.

According to Sandy Kelly, a relative newcomer tof Richmond Hill Road, the decaying structure has not been actively preserved and has attracted “delinquent behaviors” in some cases.

Wilkinson confirmed that there is “a tendency for people to hang out around here.”

According to Chris Orelup of Richmond Hill Road has described the building as an “eyesore” and noted that demolishing up with open up the neighborhood to “an uninterrupted view of Mead Park from Richmond Hill and Grove that will be lovely.”

“I believe that the vast majority of those who actually live in the neighborhood will be very glad to have it gone,” Orelup said.

Wilkinson echoed his point of view.

“I think if it was removed it would open up the vista to Mead lake and make it much more pleasing to look at,” she said.

Kelly said the Brick Barn “blocks the view of the park which is really pretty.”

“So I think bringing it down would be a good thing,” Kelly said.

Many of those who are fighting for the Brick Barn’s preservation “ don’t live near here,” Wilkinson said.

“They don’t have to see it every day,” she added.

From a budgetary perspective, Wilkinson thinks that the $65,000 earmarked for its demoition is money well spent.

“I think that it will be money well spent to remove it and make that area more accessible to the park,” she said. “It will also help the value of houses in the neighborhood.”

In response to the effort to preserve the barn for historical significance, Wilkinson said, “Just because something is old doesn’t make it historically valuable.”