Though it stopped short of casting an official vote, the Board of Education on Monday voiced support for a divisive, proposed construction vehicle route through the “South of the Y” neighborhood.

The route has been proposed to provide access to a widely anticipated renovation at the New Canaan YMCA. The renovation itself would expand the Y’s swimming pools and parking lots. Planning officials are scheduled to take up the YMCA’s application on Tuesday.

To get the work done, large construction vehicles need to get into and out of an area behind the YMCA through a proposed construction window of November 2014 through March 2015.

Two routes emerged as possibilities: an access road coming off of South Avenue, down between the YMCA and Saxe Middle School field, or directing the trucks east off of Surrey Road and then north along Putnam road, which runs alongside the south side of the YMCA.

Here’s the neighborhood we’re talking about (story continues below):

Several parents and homeowners from the “South of the Y” neighborhood urged the board at its regular monthly meeting to allow the access route to go in—citing the safety of their kids, among other concerns (the area has no busing for students at Saxe or the high school).

“This is not a neighborhood project,” said Linda Spence, who for 30 years has lived at the corner of Putnam and Surrey Roads. “It is a major construction project for a regional business. The Y should bear the impact of their decision to expand, not the neighbors.”

“I cannot imagine the noise and pollution this construction route will bring to our neighborhood, in addition to the safety hazards,” she added. “There is a tremendous human impact in this decision.”

Yet board members, noting that New Canaan public safety officials and consultants hired by the YMCA have said the Putnam Road route is safer than the access road, spoke against the alternative of an access way between the YMCA and Saxe. 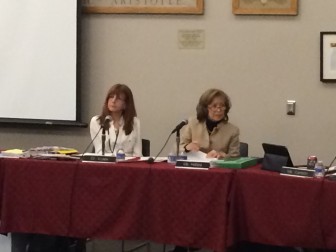 Superintendent of Schools Mary Kolek and Board of Education Chair Hazel Hobbs at the Feb. 24, 2014 meeting. Credit: Michael Dinan

“The board thinks it [the proposed access way off of South Avenue] is not advisable at this time,” school board Chair Hazel Hobbs said.

Hobbs and other board members thanked the concerned residents for their input, said they would defer to professional safety experts and called the decision difficult.