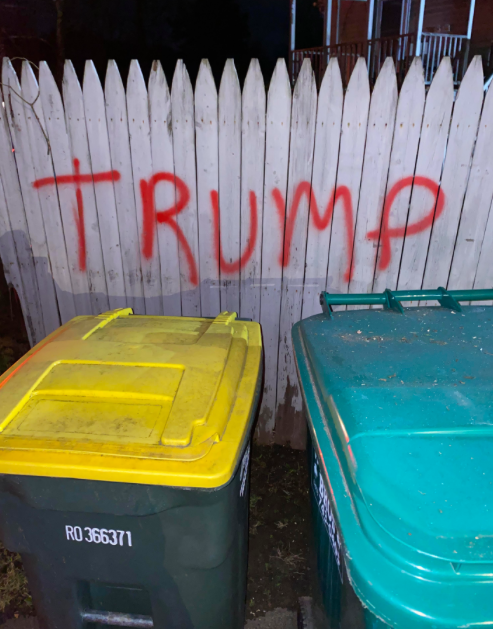 This is the spray-painted sign in question. Image obtained through Freedom of Information Act request

Saying a next-door neighbor’s political sign has led to harassment of a tenant, the owner of a Locust Avenue home has called for town officials to intervene, records show. 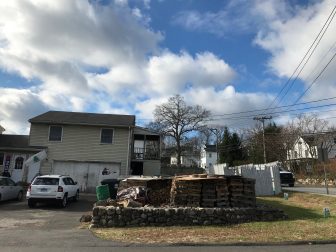 The neighbors at 113 Locust Ave. have also complained about the wood pile at 7 Summer St. Credit: Michael Dinan

Sam Li, owner of an antique Colonial at 113 Locust Ave., told town officials in a Nov. 25 email that neighbors to the east spray-painted sign saying ‘Trump’ on their own fence.

“The problem is that the sign is easily mistaken as belonging to my property, as it is literally next to the driveway,” Li said in the email, obtained by NewCanaanite.com through a public records request. “As a result, my tenant is getting all the responses to the sign, often in the form of harassment.”

He added, “Given that the situation is quite disturbing for my tenant, I really appreciate a timely resolution.” 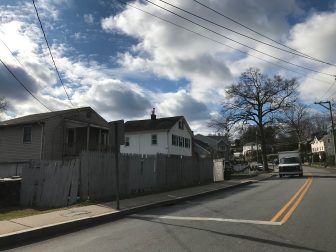 Li sent the email to New Canaan Chief Building Official and Director of Land Use Brian Platz, whose responsibilities include fielding blight complaints.

The neighbor in question lives at 7 Summer St., according to the emails. According to tax records, it’s owned by Dominick Cerretani. The emails refer to its occupant as Bob Cerretani.

A flurry of emails and phone calls appear to have come into Town Hall regarding what Li called “the big graphitti political sign” the day before Thanksgiving. The matter ultimately has been referred to an assistant zoning inspector with the town.

The tenant of the house, B.J. Markus, over the weekend emailed town officials saying that passersby, thinking the ‘Trump’ sign is his, have “screamed obscenities at us.”

“Every member of my family has been harassed over this,” Markus said, adding, “It’s been so bad, I won’t allow my toddler outside in the yard.”

On Monday, Markus said in a new email, “Just wondering if there was any progress today regarding the graffiti? There was another incident of harassment today. I’d really like this taken care of ASAP.”

The incident appears to be the latest in a longstanding dispute between neighbors.

A review of the emails shows that Li had complained to officials about the condition of a roof on Cerretani’s property. It wasn’t clear from the emails whether Li referred to the roof of the main house or a wood shed in the yard. Town officials told Li by email in February that Cerretani agreed to fix the roof once Li removed a tree near the property line which apparently was dying and whose branches were falling onto the structure.

On Nov. 24, Li circled back to the town saying in an email, “The tree my neighbor Bob is citing has been removed shortly after the Aug 4th storm. It doesn’t look like Bob has taken actions fixing his roof yet. Can you kindly remind him again?”

According to the emails, New Canaan Police were called regarding the spray-painted ‘Trump’ sign as well as Cerretani’s wood pile “and people trespassing on the property.”

Markus said in one of the emails to the town, “In addition to the graffiti the property is looking more and more like a dump with tarps on the roof, wood piles and general garbage all over the property and now the graffiti.”

The blight complaint came up during Tuesday’s regular meeting of the Board of Selectmen. Selectman Kathleen Corbet said she wanted to advise a local family with a blight complaint to municipal officials who could address the problem. Tucker Murphy, who works for First Selectman Kevin Moynihan, disclosed that the complainants had been advised to connect with Platz.