The project to replace Old Town Hall Homes is expected to get $6 million in state funding at Wednesday’s meeting of the State Bond Commission, state Sen. Bob Duff said in a news release. Update: The money was approved.

Meanwhile, seniors living in the complex are preparing to move out as the project nears the stage where the buildings will be demolished and its replacement building constructed, said Ali Ramstek, town director of human services.

The new, 55-unit building will roughly double the number of homes in the current complex, and it will be handicapped-accessible, Duff said in his announcement. Duff is majority leader in the Democratic-controlled state Senate.

The project was one of four that are expected to get funding at the commission’s Wednesday meeting. The other three are in Norwalk.

“Ensuring that seniors are able to remain in our communities once they retire is important to their health and the health of our communities. The new Old Town Hall Houses will ensure that its residents will spend their golden years in quality modern housing,” Duff said. 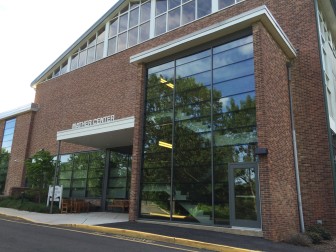 Monthly gatherings at Darien Senior Center are planned for seniors moved out of Old Town Hall Homes as the senior housing complex is torn down and replaced with a new building.

Ramstek told town selectmen in her department’s latest quarterly memo on its activities:

“Now that the funding has been secured and the relocation process has begun, we have been inundated with calls from the residents at Old Town Hall Homes. They are all very anxious and concerned about the move.

“Ali attended the June 26, 2018 Housing Authority meeting at Old Town Hall Homes and briefly met with our clients. She reassured them that they are still considered Darien residents and will be eligible for our services, as well as the services of At Home in Darien.

“All residents will be relocated by the end of December 2018. Each resident is to schedule a meeting with Nichole Jefferson, executive director of Darien Housing Authority, to discuss their particular needs.”

The quarterly report was made public at the quarterly meeting of town department heads with the Board of Selectmen on Tuesday morning. At the meeting, Ramstek talked about the seniors getting ready to move out.

Her department has been “inundated” with calls from seniors moving out of about 22 homes in the complex, she said. The town Human Services Department is working with the Darien Senior Center and At Home in Darien to help the seniors move into new housing.

A lot of the residents don’t want to leave, Ramstek said. “It’s stressful for anybody” to move, but  especially for those in their 80s and 90s, Ramstek said. About six residents are already moving out and should be living elsewhere by Aug. 1, she said.

“They’re going to have monthly gatherings at the Senior Center to keep them connected,” she said.

“Everyone wants to stay in Darien, but that’s not always an option,” Ramstek said. “They’re trying to get them as close as possible.”

Library Attorney: Decision on Fate of 1913 Building Must Come During P&Z Process

Though a clause inserted last week into a draft agreement between the town and New Canaan Library would appear to forestall a decision on whether to demolish the original 1913 library building for at least two years during construction, the fate of that structure must be decided far sooner, an attorney said Tuesday. While it’s true that the library will operate out of its existing building until the new one is completed and ready for move-in, the Planning & Zoning Commission must approve the library’s full plan for the site even before construction starts, including for the century-old structure overlooking Main and Cherry Streets, according to Ted O’Hanlan, a longtime partner at Stamford-based Robinson + Cole who was nominated last week as a state Superior Court judge (the class of nominees awaits confirmation by the General Assembly). P&Z “has to approve a plan before we can start anything, so this will be resolved by then,”” O’Hanlan told members of the Board of Selectmen during their regular meeting, held via videoconference. “I don’t believe it can be an open issue,” O’Hanlan added, where construction can commence without a final plan for the 1913 library. “The library plans to put forward a very articulated reason why it’s not proposing to save the 1913 building,” he said.

Saying they’d make an exception amid the COVID-19 pandemic, members of the Police Commission last week approved a road closure downtown for a sports team’s annual fundraiser. The Police Commission voted 3-0 in favor of closing South Avenue before Elm Street—the former “Pop Up Park” area—so that New Canaan Crew can hold its “Ergathon” event on Saturday, Sept. 26. The appointed body noted that the crew team would have difficulty holding the event on a sidewalk downtown, given that many restaurants have “bumped out” onto the sidewalk during the pandemic to create more outdoor dining space. Chair Paul Foley said the event brings good visibility to a worthy sports and self-funded sports team.