The Inn of New Canaan, an in-town senior residence and part of the Waveny LifeCare Network, has consistently earned perfect or near-perfect marks from health inspectors for several years, records show. 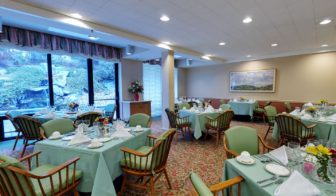 The dining room at The Inn of New Canaan, part of the Waveny LifeCare Network. Contributed

Out of a possible 100 points, the dining room at The Inn—it’s available to residents there and their guests only—for more than a dozen years has earned an average of 99 during unannounced biennial inspections by sanitarians with the New Canaan Health Department, according to a review of the organization’s files at Town Hall.

Anthony Pacchioni is The Inn’s director of dining services.

The Inn starting 11 years ago had a stretch where it scored a perfect 100 nine straight times and in 14 out of 15 consecutive inspections, between May 2006 and November 2009:

Speaking to such high scores generally and not to The Inn specifically, Sanitarian Carla DeLucia said an establishment would qualify as such if it is “without any four-point violations, without temperature violations and likely without any critical violations.”

The Inn’s minor violations for which the lodge has been cited include replacing a cutting board, covering a box of rice and putting a thermometer in a milk cooler.

The Inn serves three meals per day, plus snacks, and hosts Happy Hour and other special events for residents and their guests. Waveny LifeCare Network also sometimes invites the public for food-centered events—such as “The Iron Chef at The Inn” and the 35th Anniversary Clambake.