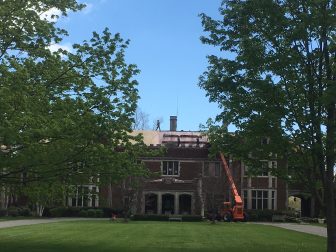 A worker atop Waveny House in May 2017 during its roof replacement project. Credit: Michael Dinan

Contractors are stripping the existing roof and making repairs to damaged areas of the structure beneath it as they go, with an eye on starting the new roof next month, according to Bill Oestman, superintendent of buildings with the New Canaan Department of Public Works.

“The risk is diminishing daily as the work progresses and we have not uncovered anything that we didn’t already know about,” Oestmann told NewCanaanite.com.

“The project is going very well.”

At this point, workers from Danbury-based Alden Bailey are on track to finish the project ahead of an end-of-year deadline, he said.

They’re starting on the east side of the 1912-built Waveny House and are expected to encounter significant structural damage as they go—due mostly to the town’s decades-old neglect of capital maintenance on it.

The $2.3 million price tag is a high-end estimate, given that it includes a Department of the Interior-recommended 20 percent contingency, officials have said. The structure itself has a wide parapet that skirts the roof, making it possible for workers to address sections of it while Waveny continues to house some town departments and host special events such as weddings.

New Canaan’s funding bodies, the Board of Finance and Town Council, approved bonding for the project earlier this year. Members of the Town Council, concerned about cost estimates that appeared to have escalated quickly in recent years, went on a site visit to the roof prior to approving the funds. There, they saw in person that the old roof is deteriorating badly, with concrete falling out and caving into the attic.

The only difficulty with the work to this point has been dealing with some members of the public, Oestmann said. Specifically, people on a daily basis are walking past barricades and ignoring warnings to steer clear of marked-off areas, so workers are being forced to chase people off, he said.

Oestmann had high praise for Alden Bailey, the company that’s completing the work, the same one that replaced the roof on the Carriage Barn and Lapham Community Center two years ago.

Designed by Greenwich’s W.B. Tubby and built in 1912 under the Laphams, Waveny House is named for the River ‘Waveney’—part of the Norfolk Broads, an area of eastern England from which the Lapham family hails, historians say. Waveny Park has been public property since Mrs. Ruth Lapham Lloyd sold it to the town in 1967—the actor Christopher Lloyd’s mother, she passed away in October 1984.