While New Canaan High School’s senior internship program or ‘SIP’ has only been up and running for about eight years, the number of students that choose to participate has skyrocketed. 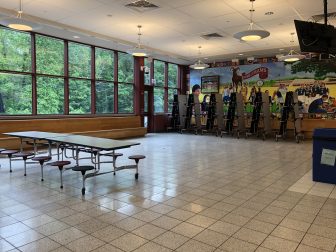 Photograph of the New Canaan High School’s cafeteria, where lunch tables in the ‘senior section’ are no longer taken down due to the number of seniors absent on internships. Credit: Eva Pace

But what is the 6 percent of the class of 2018 that chose to stay for their final month of high school up to?

Senior Zach Miller said his older sister hadn’t done SIP and he decided to forgo it, too.

Miller said he has had a more casual experience in the classroom in the past month.

“Most of the time there really isn’t much to do,” Miller said. “I only have about

three to four classes a day.”

Despite being without his classmates, Miller says he is “not losing sleep” over not choosing to do an internship and especially will not regret it once the school year ends.

He’s one of about 20 students, in a class of 309, that aren’t finishing their senior year by interning with a local business or organization. The SIP program started eight years ago.

While some students made the choice not to intern, others did not have the option due to academic or athletic restrictions.

“I tried going on one,” senior Harrison Kazlauskas said. “But I made the mistake of trying to do one at Camp Playland where my mom works over the school year, so I was not allowed.”

Overseen by an administrator, the SIP program has developed specific rules regarding “self-designed” internships.

Workload and classroom assignments vary depending on the classes seniors are taking. Kazlauskas said he finds that the smaller class sizes mean that teachers are more attentive, which has its disadvantages.

“We still have weekly tests,” he said. “You actually have to do more work because there are fewer kids in the classes, meaning teachers are especially watchful.”

“Waking up at 6:30 every morning knowing I shouldn’t have to isn’t fun,” Kazlauskas said. “I definitely wish I could have gone on an internship.”

Senior Seamus O’Hora, who is doing a post-graduate year at the Taft school next year, said he thought it would be better to stay in school and work on his grades.

“Although 94 percent of the grade is gone I still have a few friends and it’s really not as lonely as I thought it would be,” he said. “There are still three other full grades.”

English Department teacher Michael McAteer said that a Literature and Film class went from more than 15 students to just two in the past month—though, echoing Kazlauskas from a different perspective, McAteer said that could be advantageous.

“The overall goal for faculty this year was to do all we could to personalize learning,” McAteer said. “Only two kids in a classroom makes achieving this goal far easier.”

Classroom activities have switched to become seminar-style, where much of the students’ grading is based on in-class analysis and discussion, McAteer said.

“I allow the students to find the kinds of things they want to do related to our subject,” McAteer said. “Last week we did a British comedy module.”

Students contribute to classroom culture, McAteer said. The greatest challenge for him has been finding ways to keep up classroom enthusiasm.

“Maintaining some kind of class energy when there aren’t as many students is difficult because it simply isn’t as dynamic,” McAteer said.