It was Dec. 31, 1993, and this thought came to Cam Hutchins as he—3-month-old daughter in his arms, bundled up in a snuggie—followed the sound of a slapshot toward Mead Pond, where dozens of ice skaters wobbled or glided over a frozen sheet of ice, illuminated by parking lot lights and set that New Year’s Eve against a backdrop of Christmas lights: “As she gets older, we can do this.” 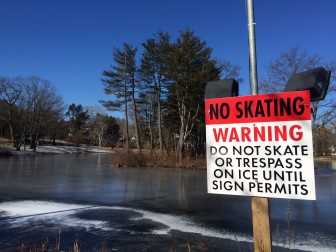 It’s been three years since the ice on Mead Pond was thick enough to skate. Is this the end of a beloved New England tradition in town? Credit: Michael Dinan

“This” being a cherished New Canaan tradition: Ice skating on Mead or Mill Pond. Hutchins, a 1977 New Canaan High School graduate, recalls the fires burning in the Lions Den at Mill Pond during his Center School days.

“All winter long, it seemed like we were always going to Mill Pond,” he recalled. “Skating there on the weekends was a big deal. Everybody did it. It never occurred to me that that would not be the case.”

Yet here we are.

It’s been several years since parks officials judged that the ponds had frozen over with ice thick enough for skating—they require six inches of ice to give a green light—and despite this week’s hideous, painful wave of freezing and below-freezing temps, they remain un-skate-able.

Some attribute the change to road salt washing into storm drains and waterways, eventually raising the salinity level of our ponds. Others say changes in temperature patterns—specifically, suddenly warmish, 40-degree days in the midst of a cold spell—prevent the ponds from freezing over.

Parks Superintendent John Howe said that about 10 or 12 years ago, New Canaan changed insurers, and that with the new policy came a new standard: The ponds must be six inches thick with ice, rather than the previous four inches, in order to allow public skating.

“That did us in,” Howe said. “We used to have skating all the time, and now there’s nothing.”

The parks crew regularly checks the ice for thickness with an electric drill, starting at the edge and then moving in, Howe said. Some town records put the last day skating was allowed even further back than three years ago, to the winter of 2008-09, when New Canaan had 26 days of skating from Jan. 8 to Feb. 12, Howe said. 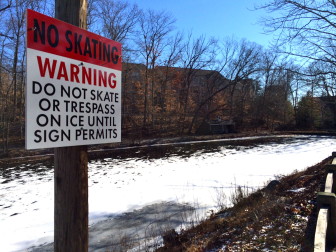 Mill Pond ranks among the very first public skating ponds in town, going back to when locals called it ‘Lake Wampanaw’ (which gives ‘Lakeview Avenue’ its name). Yet it, like Mead, hasn’t been skate-able by town standards for about three years. Will it ever be? Credit: Michael Dinan

“The way I look at it, when we were kids you didn’t have all the development in the northeast part of town,” Benko said. “You look at all the development up on Brushy Ridge and Canoe Hill, and all those little things trickle down to the Fivemile River. There’s more water, so we don’t get the thickness of ice we need on Mill Pond.”

Benko said that when he was a kid, residents ice skated on Mead Pond (at the time there were two islands there, not just one—the northern one is now connected to the “mainland” with dredged material following a project in the 1970s) from about Christmas to the first snow storm, “and they would plow the pond.”

Jim Bach, a third-generation New Canaanite who graduated from the high school in 1947, said that as a kid growing up in the latter part of the Great Depression in town, there wasn’t a whole lot else to do but ice skate (in his case, at Mead Pond) in the winter.

“They didn’t have the schools open to go and play basketball in January or February, we didn’t have all those things, so what we did was skate at that time and there was good ice,” Bach recalled. “I think on balance we had colder winters than what we have today. There always seemed to be ice down at Mead Park and it was so neat.”

Back then, there was a fire pit on the larger (southern) island at Mead Park, the one we know today, and the ice was “almost perfect, all the time.”

New Canaanites then as now have ice skating options on smaller private ponds, or ponds in public parks such as the one at the bottom of the sledding hill at Waveny (and in view of Mosley Hill). Bach recalls that many New Canaanites used to skate up on Mud Pond which straddles the New York state line.

“It always seemed there was ice in those days and it was a big event for us,” Bach said. “We didn’t have gyms, or any organized sports during the Depression or particularly during the war, because most men were away, so it was a thing to do.”

And it was a thing Bach’s own father did, too, back in the 1920s, before Mead Pond was dug.

“My dad grew up in this town and he used to tell us that before Mead Park was dredged for the very first time, it was a swamp—and that swamp is another story—but my dad and his friends would go down to the so-called swamp, which was a quasi-pond, if you will,” Bach recalled. “And they would lower the water, which they could do at the dam, and then everything would freeze out there and they’d go out on the frozen pond at that lowered level, and cut down all of the reeds, cut them down and drag them off, and then go and put the boards back in the dam and raise the water-level of the swamp and it would freeze and they’d have perfect ice. I can remember my dad telling me that.”

For another New Canaan dad—Hutchins—the vision of ice skating with his children never materialized, since the frequency of those days when Mead Pond was ready for ice skating steadily diminished.

“By the time my daughter was three or four or five, it just didn’t happen that much, it didn’t freeze as much, so she never got into that habit,” Hutchins said. “Occasionally she would have friends over and they’d go to Twin Rinks, but that’s a different animal.”