Stella Nolan runs downfield to score her third goal of the day. Contributed

The sun may not have been out, but that didn’t stop the Grade 6 Red team on their first game of the season as they took a 9-4 victory over Ridgefield 6 Black on Saturday, April 22, 2017. The rain came down but the score kept going up as Stella Nolan and Caroline Underwood led the goal scoring with 3 goals each. Shawna Ferraro, Ella Imbruce and Polly Parsons-Hills each had 1 goal. Two assists each were made by: Reagan Bailey, Katharine Byrne, and Caroline Langford. Stella Nolan had three assists. And, for the first time in net, Katherine Wronski put on an amazing display of defense as she saved 13 shots. Her positioning and quick hands helped lead the team to a successful win. The game would not have been won without the unyielding effort from the rest of the players: Kate Barnard, Grace Crookenden, Nola Kammerer, Molly Reed, Abby Richardson, and Kate Warner. They stole away balls, made passes downfield and overall played effortlessly. It was 6 Red’s first game and win. Their coach, Maureen “Mo” Deegan was overjoyed by this win and high-fived each girl as they ran off the field when the whistle blew which marked the end of the game! This team looks as though they have a promising season ahead of them. 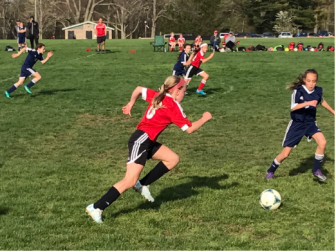 Devon Russell races down the sideline during the second half of New Canaan’s 4-3 victory over visiting Wilton. Contributed

After a long winter break, the New Canaan 2006 Girls Red was anxious for payback after last season’s heartbreaking come-from-behind loss to arch rival, Wilton Blue. Sunday’s season opener was under gorgeous blue skies in Waveny Park, but it was immediately obvious that a victory for the Rams would not come without a fight as Wilton found the back of the net on their very first possession just 50 seconds into the game. Rather than deflate the New Canaan girls, the quick strike seemed only to wake the sleeping Ram. New Canaan countered almost immediately when Lila Gizzie, in her first game with ’06 Reds, connected with center midfielder, Ava Pertusiello, who blasted a shot into the top left corner of the net. The quick reply not only knotted the game, but also sent the message that it was going to be a tough fight.

Moments later, Wilton seemed assured to retake the lead after being awarded a penalty kick in just the 8th minute of the game. Fortunately, keeper Tema Wagner was up for the challenge and made a spectacular save to keep the score tied at 1-1.

New Canaan quickly returned to form with wing-backs, Katie Quill and Kathryn Norton making deep runs into the Wilton end, feeding the New Canaan attackers, Pertusiello, Devon Russell, and sisters Ceci and Kallie Patterson. With multiple shots on goal, Ceci seemed destined to score, but had to settle for an assist (and potentially bragging rights at home) after blasting a shot in which twin sister, Kallie, neatly cleaned up off a deflection, putting the Rams ahead 2-1.

Kallie was determined to score again, bulldozing her way through the stingy Wilton defense, earning a penalty kick for New Canaan on a tough tackle within the Wilton box. Pertusiello’s resulting PK was hit with such force, the helpless Wilton goalie was left flat-footed with her team heading into halftime trailing New Canaan 3-1.

New Canaan’s somewhat comfortable halftime lead quickly vanished as the second half started almost exactly like the first. Wilton scored a beautiful breakaway goal in the opening minute. But, unlike the first half, the visitors would back-up their immediate strike with another goal within minutes, knotting the game at 3-3.

Coach Luke “Greenie” Green made several adjustments to the Ram defense, at times switching Quill, Norton, and Chloe Oyekanmi at center D, with speedster Gizzie locking down the right side.

New Canaan was not about to go down without a fight. Moments after Wilton’s tying goal, Oyekanmi hit a rocket that sailed inches over the bar. Soon after, right midfielder, Hadley Walker, beat several defenders and was taken down just outside the Wilton area. To the relief of the Wilton fans, Pertusiello’s ensuing direct kick cleared the goal by a fraction.

Now, half-way through the second half, New Canaan had found their stride with Quill and Norton playing lock-down defense and Russell making multiple penetrating runs up the right wing. Patterson would ultimately score the deciding goal on a scramble in front of the Wilton net.

With time evaporating, Wilton was determined to once again draw even, but goalkeeper Fiona Mueller had other thoughts. On a breakaway down the right side, Wilton’s right wing took a touch that, under normal circumstances, would have had just the right amount of pace. But, to the Wilton attacker’s astonishment, Mueller darted off her line, continued 20 yards out of the penalty area, and knocked the ball safely out of bounds.

It was a back-and-forth battle all afternoon which, in the closing minutes, was perfectly embodied by a hard-fought, yet clean, fight for the ball between Wagner and a Wilton defender, directly in front of the New Canaan bench. In what looked more like a rugby scrum, with her teammates cheering her on, Wagner, and the Rams, ultimately prevailed. 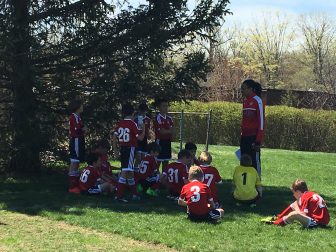 Coach André Ambersley gives the boys of NC White 07 a pep talk during half time.

On the first glorious spring weekend day, New Canaan Boys White 07 happily took away their first victory of the season in their match-up against Wilton Gold 2007. Fresh and eager to play, the boys passed and ran, putting the pressure on Wilton the entire game. With a first goal by Parker Della Bitta early on, New Canaan showed that they were on the offensive. After several attempts on goal, Christian Crovatto got a second ball past the goalie, bringing the score to 2-0. In goal, Liam Cannon shut Wilton out.

However, early in the second half, Wilton cut their deficit in half. But New Canaan quickly answered back. Crovatto dribbled past a Wilton defender to get the ball into the box. His terrific pass resulted in Gregory Martin’s smashing the ball into the goal. Then, Della Bitta’s powerful shot from twenty yards out flew over the goalie’s head to bring the score to 4-1. Finally, Quinn Scanlan got one more past Wilton, ending the game with a score of 5-1. With great defense, offense and much improved passing skills, the boys started off the spring season with a bang. 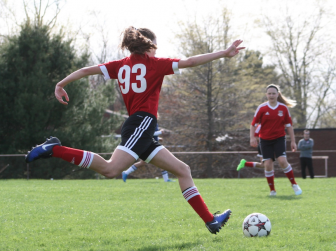 The New Canaan 2005 Girls Black team kicked off its season with an afternoon game Saturday at Conner Field against OGRCC Thunder Blue. The girls were also playing their first game under their new coach Ryan Fairhurst, and responded to his new direction.

After an early score by OGRCC, the NC girls found their form and began to move the ball up the field in shorter more well controlled passes. Kate Dickinson made one of those passes across the mouth of the goal, only to be met by Charlotte Walter’s foot who kicked it in from the left side to tie it at 1-1. Walter scored again from the left, putting herself in position to accept the pass from Rory McCarthy to put New Canaan up 2-1. In the first half, Kate Warner controlled the ball making numerous ball fakes and distributing the ball to advance the offense. 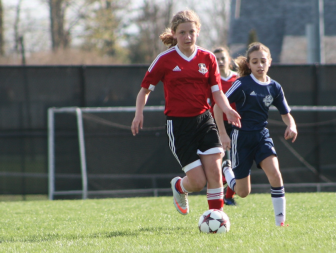 The first half ended with New Canaan ahead 2-1, but the Black team’s offense spent most of the first period in OGRCC’s end of the field. Keeper Emily Fox ably handled anything that came her way.

The second half opened with more of the same, a goal by Walter to give her the hat trick. She headed a ball forward (actually off of her face) and followed it up with a drive into the net. With the game at 3-1, Warner took advantage of the keeper coming out after the ball and was able to kick it past her for the goal making it 4-1. The midfielders kept the pressure on and it paid off as Abby Holmstead used her power to blast it past the keeper to increase the lead to 5-1. A throw in to a packed box in front of OGRCC’s goal found Holmstead again who muscled it at the goal, but the keeper was unable to handle it and Lauryn Lee was there to pick up the rebound and tapped it in to make it 6-1. OCRCC managed a late goal to make it 6-2, but the New Canaan girls all continued the prodigious striking effort with many more shots on goal resulting from effective and patient team passing.

The New Canaan 2005 Girls Black team played their second game of the weekend late Sunday afternoon inside the High School track oval. After a high scoring output the day before, the girls entered this game with a degree of confidence. “I told the girls, yesterday’s game was our benchmark, I don’t want go below that in terms of effort,” Fairhurst told the parents before the game. The girls responded to their Coach’s call and shut out Westport White team 5-0 adding to their weekend goals total.

Early on Charlotte Walter again set the tone with a number of good chances, only to be stopped by quality saves by the Westport keeper. The New Canaan offense kept up relentless pressure and fullback Natalie Plosker creeped up and struck the ball from the top of the box for the first score. The Westport goalie kept her team in the game with some nice saves and the half ended at 1-0.

Early second half pressure from forwards Reagan Quinn and Kelly Marchiony with help from the midfielders kept the ball in the Westport zone. Abby Richardson struck gold when Marchiony battled for the ball in the corner and dug it out and centered it to find Richardson in front of the goal. She pushed it with her right foot, catching the keeper off balance for the score to make it 2-0. The girls continued to make controlled passes and Reagan Bailey showed extreme patience as she waited with the ball in the corner and centered it to find Alex Gelvin who drove it home. The Westport keeper was aggressive, often coming to the top of the box to get control of the ball. Paxton Beladino took advantage of this, however, as she caught the keeper out deep and high kicked a bouncing ball over her head for the score to make it 4-0. Beladino again was in position to receive a centering pass from Quinn and was able to find the back of the net for her second goal of the game. Westport mounted an offensive attack with a strong shot on goal that New Canaan keeper Fox pulled in to keep her opponents off the board and lock in the final at 5-0.

The New Canaan BVSA Cardinals lost to the Norwalk Magner team 11-1. The Cardinal offense was powered by quality at bats from Alex Benevento, Nick Burns and Peter Cioffi. The Cardinal defense was anchored by Thomas Garcia, Robbie Hellman and Jack Lenihan.

The Stamford Insurance Group Pirates defeated the BVSA Cardinals 9-2 in a hard-fought game Saturday. The Pirate offense was solid with great at bats from Danny Rogers, Mason Pickering and Mark Taubner. The Cardinal offense was powered by Johnny Maechling, Cullen McCarthy and Eoin Mueller. The pirates got great pitching from John Bajaj, Connor Lytle and superior catching from Gram Ladley. The Cardinal defense was anchored by Colin Perkins, Nate Rucci and Colin Tiscornia.