With a 10-year lease signed and a final agreement in place, New Canaan could have its new Post Office on Locust Avenue within one year, officials said Thursday. 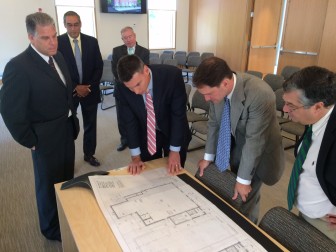 The lease between property owner LJ 18 Properties LLC and the U.S. Postal Service includes two 5-year options to renew beyond the first 10 years, according to New Canaan resident Richard Carratu, a principal of the company that owns 18 Locust Ave., future Post Office site. 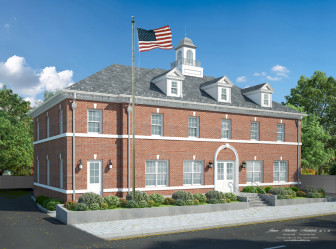 After sorting out some final concerns regarding traffic flow and parking, town officials in May approved a site plan for a new, two-story brick, cupola-topped, Federal-style structure. USPS announced last week that it had signed a lease. (The Post Office will occupy the ground floor and a tenant or tenants would work upstairs—no one has agreed to rent that space yet, Carratu said.)

One year ago, it wasn’t clear whether or when New Canaan may have a long-term, permanent Post Office. Himes got closely involved last fall, as did Mallozzi and New Canaan Chamber of Commerce Executive Director Tucker Murphy.

Himes said during the press conference, held in the Town Hall Meeting Room, that he was “thrilled” that approvals had been finalized “because this created a huge amount of anxiety in the town of New Canaan, and Rob was a huge champion for this thing, very focused and really responsive to the people of New Canaan.”

“And I have to thank the Post Office, too—they operate with a lot of rules that are about the safety of their employees and about traffic safety and about the disability access,” Himes continued. “They operate with a lot of rules and New Canaan is a pretty unique place. It’s a small place where the land is enormously expensive and the citizens have a historic-looking downtown so they were operating under a lot more constraints than they were used to doing so there were a lot of moments there where Rob and I were quite concerned but I have to hand it to him for being flexible and working with us.”

Mallozzi noted Murphy’s contribution and, asked for his thoughts on the location, said the area of Locust Avenue near Forest Street is set to see a lot of positive activity, with a mixed-use housing and retail structure also going up now.

“I think you’re going to see more of that, I think Planning & Zoning is going to encourage that,” Mallozzi said. “I think it’s a wonderful hub for that.”

He added: “The nicest thing about this whole thing is that we’re talking today about this building and we can talk about some of the angst we all went through, but in two years when we are there to pick up our packages for Christmas, all we are going to think about is what a great building, what a beautiful building, and we are going to forget all the angst we went through and all those phone calls because we have not only got a Post Office but we have a much, much, much more beautiful building in that spot than what was there before so it’s kind of like a home run for all of us.”