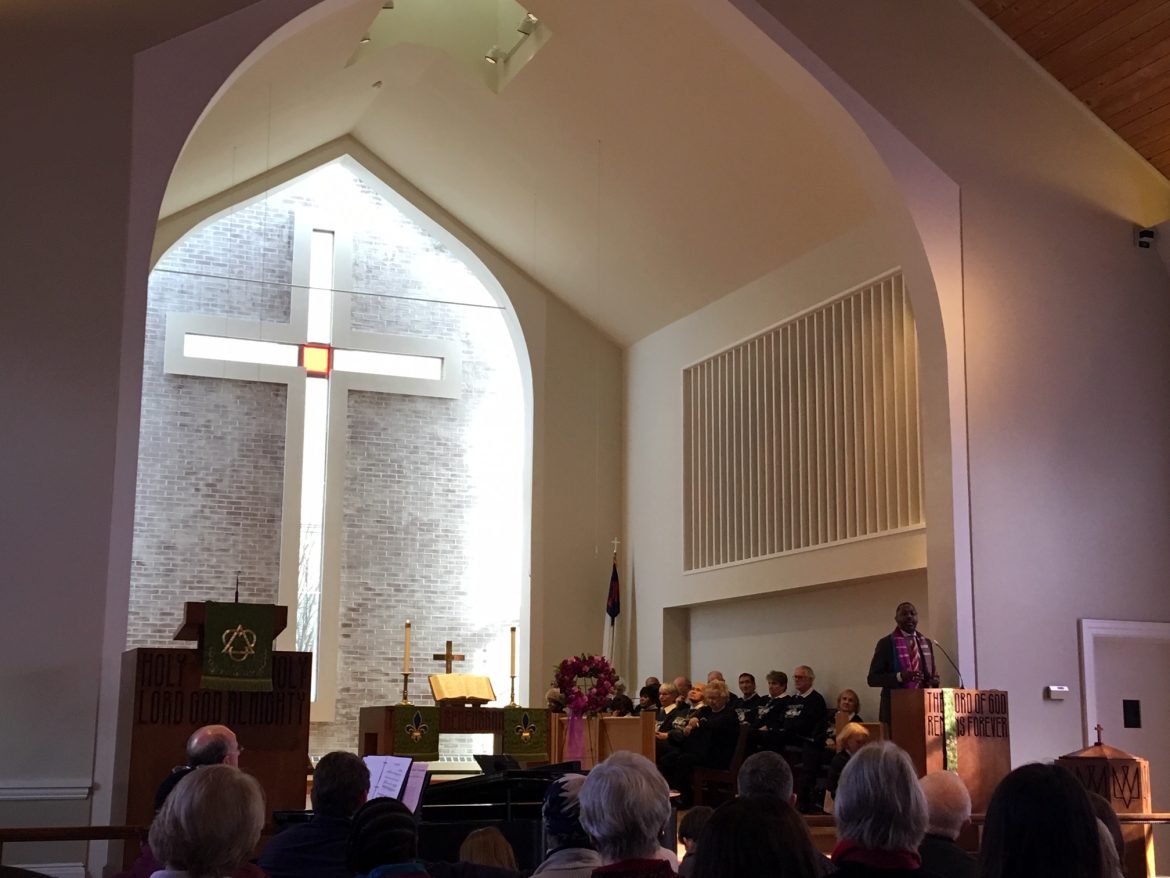 The Rev. George Walker Jr. addresses those gathered Jan. 21, 2019 for an Interfaith Service of Worship, a celebration of the life of the Rev. Dr. Martin Luther King Jr. at United Methodist Church. Credit: Michael Dinan

A native of Memphis, the city where the Rev. Dr. Martin Luther King Jr. was assassinated in 1968, George Walker Jr. has felt a lifelong connection to the civil rights leader.

The Rev. George Walker Jr. during the Jan. 21, 2019 Interfaith Service of Worship, a celebration of the life of the Rev. Dr. Martin Luther King Jr. at United Methodist Church. Credit: Michael Dinan

An ordained minister himself, Walker attended King’s alma mater, Morehouse College in Atlanta, pledging the same fraternity, then launched a career that’s included positions on the U.S. president’s Board of Advisors for Historically Black Colleges and Universities, a member of the American Leadership Council for Diversity in Healthcare and as vice president of diversity, equity and inclusion for the Planned Parenthood Federation of America.

This past weekend, Walker recalled Monday while addressing a packed United Methodist Church as the guest speaker during New Canaan’s annual celebration of King’s life, a King quote that he had “decided to stick with love” because “hate is too great a burden to bear” came to Walker’s mind.

Following a workout and lunch in Manhattan, Walker said, he and his husband were riding a subway back uptown when he spotted an “older black woman who caught my eye.” 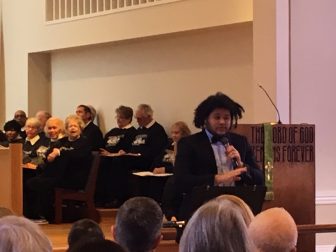 “She had several ‘I love Jesus’ buttons and a placard I couldn’t read,” during the  17th Annual Interfaith Service of Worship, which drew more than 250 people on a freezing cold Martin Luther King Jr. Day.

“When the opportunity came about, my spouse gestured for her to take a seat. I was standing. Her protest signs were signs about a Jesus that I do not recognize. The sign had incoherent messages about women and their health. There was an odd note about homosexuality and messages that prompted the end of times in ways that we do not often discuss in polite company. And I kept thinking about, ‘What would Jesus do?’ There’s another pithy expression that is often co-opted.”

Yet what we do in such situations—confronting someone with a different point of view—is hugely important, Walker said, a real-life test of turning to love or hate. As it happened, a young Latino woman who likely had attended the Women’s March downtown, engaged the woman on the subway. 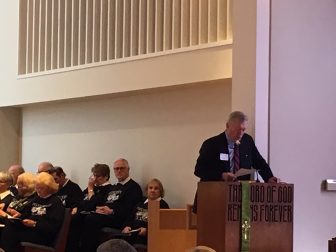 “Clearly she did not agree some positions but she was able to be empathetic,” Walker recalled. “She probably knew that this woman was wrestling with mental demons that many of us are never, ever privy to. She smiled and listened in a way that wasn’t patronizing, and I was getting an education. I was doing what it is that we are often called to do—study the lessons of wise people. This young woman flipped the script. She made me think—and I suspect that the encounter on the subway was an education for her as well.”

Walker said he was “not standing in judgment” of anyone, as he often knows what the right thing to do is, “but so very often I fail.”

“I do not always love the poor,” he said. “I dismiss those with whom I don’t agree as either ignorant, unsophisticated or unloving. I choose to write stories in my mind about choices that are differently because, clearly, I know better. I believe that everyone who sees me as a menace is evil and their own understanding is faulty and unkind. But friends, that is not about choosing love. In my heart of hearts, I believe that choosing love is instinctual but we must make it a habit. We must be intentional each and every day to ask ourselves the questions about what inspires us. And when we get answers, we recommit daily, even by the minute, to brush off the constant bombardment of images and experiences that would make us turn to our lower angels for comfort.” 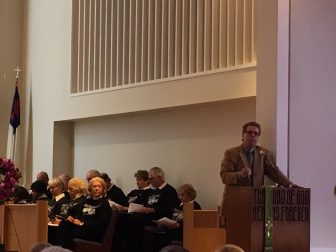 The Rev. Eric Fjeldal during the Jan. 21, 2019 Interfaith Service of Worship, a celebration of the life of the Rev. Dr. Martin Luther King Jr. at United Methodist Church. Credit: Michael Dinan

Walker’s address anchored a stirring community service organized each year by the Interfaith Council of New Canaan. With music supplied by the Serendipity Chorale and with an official proclamation read out by New Canaan First Selectman Kevin Moynihan, prayer for peace from Jen Zonis of Temple Sinai in Stamford and invocation from Steve Pond of St. Aloysius Church in New Canaan.

Invoking a different quote from King, New Canaan High School senior Ryan Hernandez, a student-resident at ABC House of New Canaan, during his own address, called on those gathered to continue pushing forward, even if they could no longer run, walk or crawl. In an imperfect world full of imperfect people like himself, Hernandez said, it was important to keep pushing forward even faced by those who would oppose you.

“Those people will never go away, but as long as you do what is right hopefully the love that we spread will make them think once or twice,” he said.

Hernandez said that he’s had an opportunity “experience two different worlds” as an ABC student, and that he intends to honor a lesson from his parents to better the world for the next generation, attending college and continuing his life of learning.

“We all have a duty here as human beings and it is our job to build the world up,” he said.

Like Hernandez, the Rev. Eric Fjeldal of the Methodist church seemed to anticipate Walker’s theme in welcoming the crowd to the annual service. He said he’d recently attended a “Midnight Run” in New York City, providing food, clothing and essentials for the homeless.

“More than anything else it provides connection, it provides a sense of community, it provides an opportunity for us to see our homeless brothers and sisters as the children of God,” Fjeldad said.

He added: “Engaging with those on the streets is transformative, because as necessary as the food and clothing and other essentials are, the conversation, the smile, the acknowledgement is what stirs our souls and brings about change in us. Another way to stir our sous is to gather at events like today, to worship, to remember, to reflect and to pray.”

We do so not to feel “feel good about ourselves and say we did something, but for a deeper reason,” he said, one that “confirms Dr. King’s observation that darkness cannot drive out darkness, only light can do that.”

Walker noted that people teach by their own example and observed, “I refuse to look at today in any other way than being a little better than yesterday—despite examples that show me differently.”

“Hate—it’s not what the majority of people want. And while the theme for today is quite simple—‘choose love’—we know it takes loads of courage and personal commitment to change the story. We must be intentional.”

Walker called on the congregation to ponder, “as we engage in these words, simply think about this: What does it mean to choose love, for you?”

“What does it mean to choose love, for you? Please reflect in the quiets of your mind about what choices you are making. Because I find that what grips your soul in the quiet is what will motivate you to action, and that will be different for all of us. Most of the spiritual leaders we respect took time to think about what choices they made. It wasn’t about greatness for King. We regard him so highly because he had a calling that went beyond anything he could see or experience in his lifetime. His answer to the question was simply so powerful that the world could not hold it. Perhaps you know people who have chosen to live so intentionally that their creativity is bursting from the seams. It’s their passion and nothing can hold it in. This is what King had, a vision so bright it would outlive him. Quietly, what passions do you have when you think about choosing love? Now that you have thought about what it means to choose, what are you going to do about it? By this I mean, what actions will you take?”

Though many quote often from King’s famous “I have a dream” speech, Walker said, it would be a disservice and a mistake to relegate the sentiment of that speech to dreams rather than a possible reality.

“Our collective spirit in this place is one of the actions we can take,” Walke said, noting that some of those in attendance may be “sitting next to someone that you never met,” representing “an opportunity to be open in exchanging stories and moving to a new action, perhaps you will make a friend.”

“When you leave this place, where shades are different and experiences are present, think deeply about what examples you set for those you love,” he added. “Do they see you doing inclusion? If you have a party, or a dinner, or something where you’re relaxing and nobody has an agenda, you’re just having fun, will children and neighbors see and inspect that loving couples and single people of all configurations are welcome at your table? Maybe they see if you have a best friend who worships differently or moves in the world differently because of a disability. Perhaps they see you ‘doing love’ in what you say about what is right. In the way you vote or express an opinion.”