Lifelong town resident Scott Hobbs recalls that New Canaan was more economically diverse when he grew up here than it is today.

And due to the success of the town, “we seem to become less and less economically diverse,” Hobbs, chairman of the New Canaan Housing Authority, said Wednesday. 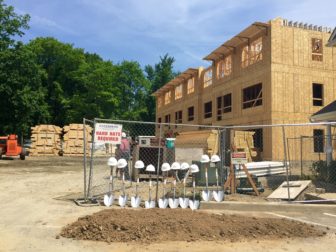 The Housing Authority of the Town of New Canaan is celebrating 60 years of operating affordable housing at Millport this year.

“So the more that we are able to provide housing and have the people who work in the community actually live here, too, creates a healthier community,” Hobbs said from the site of a widely anticipated project that will see the affordable units that overlook Mill Pond expanded and built with greater density.

A handful of town officials attended the groundbreaking ceremony at the Millport Avenue Apartments. The Housing Authority is now completing a phased redevelopment of the site, starting with 33 new affordable housing units, with 40 more to come.

According to Hobbs, the project is being financed in three ways. 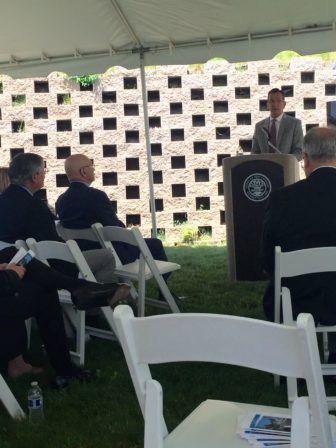 Governor Malloy speaks at the Millport Phase 1 Groundbreaking Ceremony on the morning of Wednesday, June 1, 2016.

“First, the town of New Canaan Housing Fund has paid basically all the seed money of several million dollars,” he said. “The second part comes from 4 percent tax credits which the state gives to projects like this, and then we sell them to people like Art Casavant from People’s United Bank. And the third element, is where we take out loans, which is where Bankwell came in and gave us a very good deal on loans and helped pay for the rest of it.”

For those moving in the new apartments, which Hobbs expects to be by January 2017, all 73 units in Millport will be affordable to households earning at or below 80 percent of area’s median income, as required by state law. 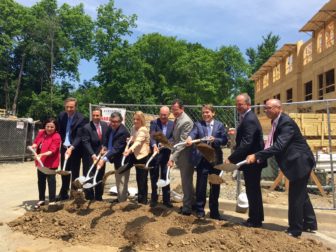 Members of the state and local legislature along with the Board of Commissioners of the Housing Authority of the Town of New Canaan pick up their shovels on the grounds of Phase 1.

Millport resident Kara Laviola said this expansion of affordable housing will ensure that as a single mother of two children, she will be able to provide her kids with the opportunities that she herself had growing up in New Canaan.

Dannel P. Malloy, governor of Connecticut, attended the groundbreaking to show his support for the expansion of affordable housing.

“We are trying to make sure that the people of CT have options to remain in the state as the grow older, and to make sure we have a diverse group of people living in our communities,” Malloy said. “Bottom line is, we are better when we properly house our citizenry and that we make sure that we take care of those who need our help.”

One thought on “‘A Real Good Moment for New Canaan’: Officials Break Ground on New Affordable Housing on Millport Avenue”