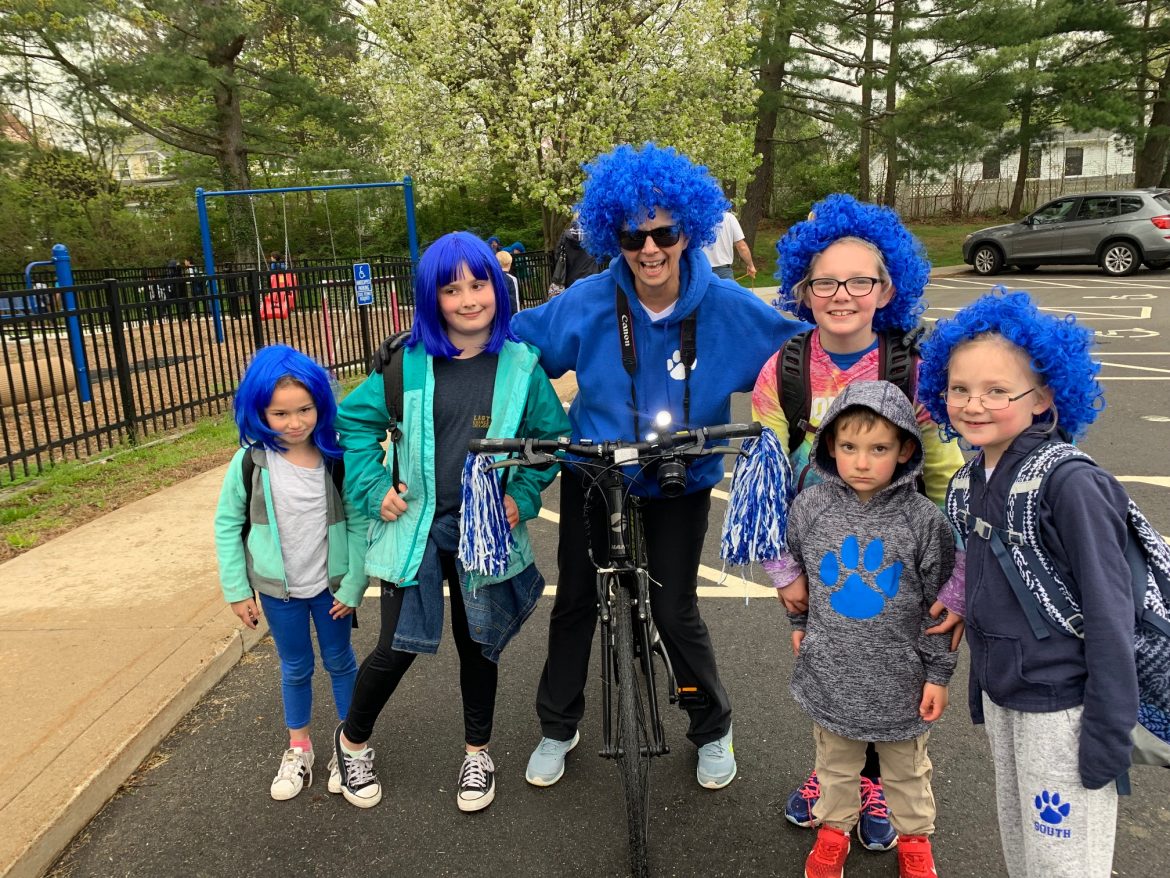 Most educators can’t say they’ve had a colleague fall off the roof of their school wearing a chicken costume.

For Joanne Rocco, though, this was just another day on the job.

Rocco, who began her 27-year career in New Canaan Public Schools as a science teacher at South School, had borrowed a chicken costume from a parent to use in her “Egg Drop,” a science lesson where she dropped eggs from various levels of structures, including the roof of the school. When she was called away to go on a site visit with the superintendent, another teacher volunteered to take her place. Rocco returned to the school around 5 p.m. to be told that the teacher had fallen off the roof during the Egg Drop and was brought to the emergency room, all while wearing the costume. Thankfully, he was not injured.

“You have to laugh at stuff like that,” Rocco said in a video created to mark the milestone of her retirement from the district. “Those are the stories you don’t get if you work in an office.”

It was this type of excitement, coupled with the joy of working with children, that first prompted Rocco to go into education 40 years ago, Dr. Bryan Luizzi told Board of Education members during their regular meeting Monday while honoring Rocco and three others who are retiring this month from New Canaan Public School.

Luizzi and the Board of Ed honored Joanne Shullman, the West School Literacy Specialist who has worked for the district for 11 years, as well as Deb Carney, who taught special education at West School for 22 years, Tris Chase, who taught special education at South School for 31 years, and Director of Human Resources Gary Kass, who took on the role in 2012 after two decades with the district, and was also the founding Principal of Dwight Elementary School in Fairfield.

Rocco began her career as a middle school science teacher for Catholic Schools in Bridgeport, Trumbull and Stratford before making the move to teach elementary science at South School in 1992, officials said. After six years of teaching science at South and one year at Saxe Middle School, Rocco transitioned into the role of assistant principal at South School, a job she held for five years before becoming principal in 2003.

Now, after 27 years of service to the New Canaan Public School system, she announced this winter that she will retire at the end of the school year.

“My career in education has brought me more joy than I ever could have imagined,” Rocco wrote in a letter to South School parents. “There is no better place to work than South School where there is so much laughter, learning and love packed into each day.”

It was Rocco’s generous spirit and genuine excitement that brought so much “laughter, learning and love” into South School over the past 27 years, she said in the letter. Whether by racing through the halls on roller skates before the Connecticut Mastery Tests or donning her famous blue wig on Walk to School Day, Rocco cultivated an atmosphere of positivity and support hard to find in other school districts.

“We have a saying in education: ‘Whatever it takes’,” Luizzi said Monday. “Joanne personifies that saying. Her work throughout the years has been an inspiration to generations of students, parents and colleagues and the legacy she leaves behind at South and across NCPS will be everlasting.”

Luizzi told the Board that of all the faculty and staff in the New Canaan Public Schools, only three individuals know how to operate the planetarium in NCHS: Tim Haag, head of the NCHS Science Department, an astronomy teacher at the high school, and, unsurprisingly, Rocco.

“After Joanne’s first trip to the planetarium, she realized the power it held to catapult a child’s imagination,” Luizzi said. “So she committed herself to learning how to run it so she could bring that magic to her students frequently and skillfully. Simply put, that is Joanne Rocco.”

For Rocco, one of the hardest things to leave behind will be the people.

“My favorite thing about this job is everyday coming into this building and interacting with hundreds of people,” she said in the video. “The daily interactions with staff members, students, parents- that’s something I’m really going to miss everyday.”

What’s she looking forward to about retirement? An escape from the daily commute on the Merritt Parkway.

“What most excites me is not commuting,” she said with a laugh. “I will not miss the traffic.”