Our first dog (or “New Canine” resident, you might say) featured here is Beaufort, a 3.5-year-old Newfoundland.

Owner Leslie Kammerer, a New Canaan resident, told us on a recent afternoon as Beaufort earned oohs and ahhs (and awws) on Elm Street that the big lug has been working as a certified therapy dog at Norwalk Hospital for the past 18 months or so. 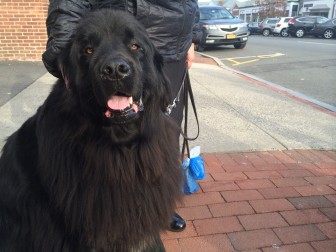 This is Beaufort, a 3.5-year-old Newfoundland. "I don't know what we'd do without him," owner Leslie Kammerer of New Canaan says. Credit: Michael Dinan

Acquired as a birthday present to Kammerer from herself, Beaufort is a “very well-trained dog,” she said.

“I spent probably more money on the training than I did on the dog. He’s like a fine piece of Tiffany jewelry, but never mind,” Kammerer said in a southern drawl. (Yep, she’s from Beaufort, S.C.)

Asked what Beaufort likes or dislikes, what he loves, Kammerer answered: “Sleep. He likes to sleep. And he loves the snow, as you can imagine.” 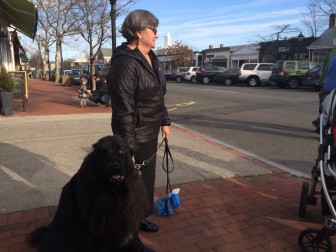 So it’s been a nice month for Beaufort—though it also sounds as if every moment is pretty good.

“He’s very, very spoiled and I love every minute of it,” Kammerer said. “I don’t know what we’d do without him.”