For this installment of “Biz on Biz”—where we wander into a New Canaan businesses and ask the people who work there for a personal favorite item or service at another downtown biz—we came upon the staff in Island Outfitters at 80 Main St. 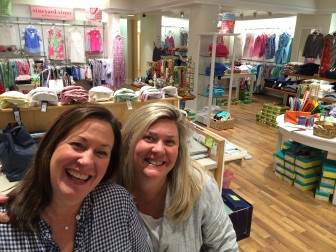 The clothing and accessories store—one of seven, the company is headquartered in Newport, R.I.—is marking 20 years in 2014. Inside, manager Ann Donovan told us she that one of her favorite spots for shopping in New Canaan is She la la at 120 Main.

“They have cute jewelry and they do monogramming on handbags, and they’re great for giving as gifts for people,” Donovan said. 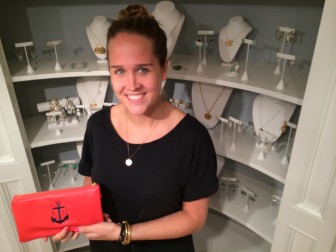 Virginia Utley is manager at She la la—she’s holding one of the New Canaan shop’s handbags, a favorite item of the staff at Island Outfitters nearby. Credit: Michael Dinan

The cross-body handbags at She la la come in about 10 different colors and are among the most popular that the store carries, manager Virginia Utley said.

“They’re probably our number-one selling handbags for all ages, it ranges from kids who are 16 to women who are in their 60s,” Utley said.

She la la’s jewelry ranges from $24 costume jewelry to $300 semiprecious stones, and are popular for gifts around prom time and for wives and friends, “and women just buying it for themselves,” Utley said. 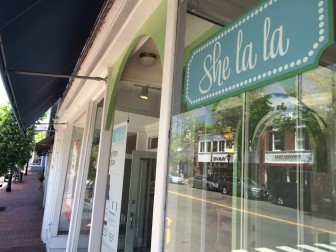 Here’s the Main Street entrance to She la la at number 120, just at the bottom of Elm. Credit: Michael Dinan

“We make a wide range in terms of price, so you’ve got less expensive jewelry and jewelry for people who want to spoil themselves,” she said.