It’s often a morning-after “cure-all” and other times simply a meal. Whatever the purpose, the breakfast sandwich has a firmly established niche in the culinary world.

In New Canaan, the Deli-Bake is long-gone and we recently lost the Forest Street Deli’s legendary “Big O”. That said, we still have more than a half-dozen eateries featuring some form of breakfast sandwich on their menu.

Here is a look at our five favorites: 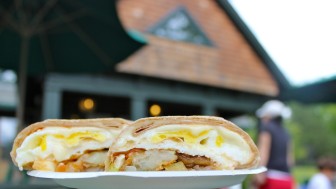 With a menu featuring fresh salads, sandwiches and wraps, Emad Aziz’s Mead Park mainstay is a dining destination that transcends the average public park snack bar. The Mead Park Breakfast Wrap follows the trend, with eggs, cheese, potatoes, avocado and a choice of bacon, ham or sausage topped with a spicy pepper sauce and held together in a grilled whole-wheat tortilla. 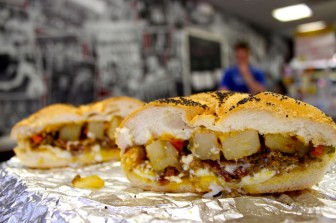 The Hotsy at Chicken Joe’s.

The Hotsy is a bacon, egg and cheese with the added attraction of Chicken Joe’s delicious home fries and their signature spicy chili. Unlike many places, the bacon is cooked fresh on the grill and not pre-cooked. It costs about as much as a bottle of Rolaids and tastes a heck of a lot better. Add in the chance to dine under the watchful eye of Joe Marotta and other New Canaan sports figures immortalized on the Chicken Joes’s wall…it’s the perfect way to kick-start your morning after a night out on the town. 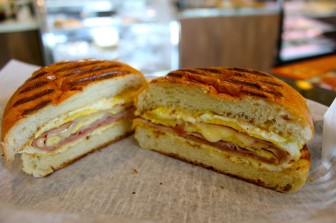 The French at CT Sandwich Company.

Eugene Chun’s unique twist on a standard ham, egg and cheese is a new and most-welcome addition to the pre-noon New Canaan dining scene. The eggs are scrambled and cooked to fluffy perfection. Gruyere and Dijonnaise add a complexity not found in the oft-used American cheese. Add in a healthy amount of fresh ham and a delicious brioche and we have a gagneur. Oh and be sure to wash it down with one of three delicious juices. 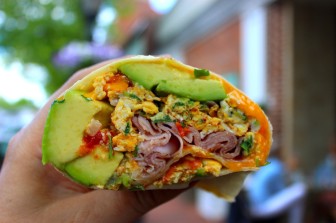 As tough as it may be to bypass (no pun intended) the famous Huevos Rancheros at this Elm St. staple, the Superico Burrito is a great alternative. At $12 it’s the most expensive sandwich on the list but with that said it’s also a classic example of getting what you pay for at this popular Elm Street staple. Three eggs, ham, cheese, a healthy dose of avocado, salsa and fresh herbs make the Superico a meal sure to fill the emptiest of stomachs, and could carry you right through lunch. 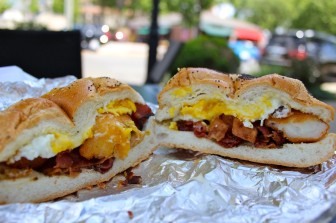 Tony’s is mobbed most mornings and one only needs glance at the menu to figure out why. Dozens of inventive sandwiches, wraps and salads as well as premade entrees and homemade soups make this a popular choice among New Canaanites both young and old. Leading the way on the breakfast menu is the New Canaan Special…a bacon egg and cheese with those addictive potato cones on a poppy seed roll. Go big and order it with a double egg.