The Board of Education on Monday unanimously re-elected Katrina Parkhill as its chair.

The school board also voted 9-0 to re-elect Brendan Hayes as vice chair and Julie Mackle Reeves as secretary.

In nominating Parkhill to a second term, Hayes noted that “it’s been quite a year, to say the least.” 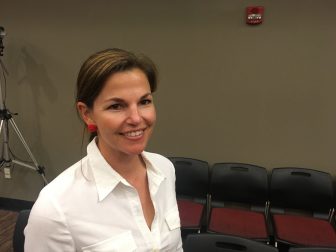 “In a typical year the board chair has a ton of responsibilities,” Hayes said during the meeting, which had members attend in person in the Wagner Room at New Canaan High School as well as remotely. “Many hours spent with the administration, the Board and various committees to work through things on behalf of the Board and really be the leader of the Board. Really what was that means is a ton of hours. Incremental hours and dedication that goes beyond what you typically do as a Board member. And this year it’s probably 10 to 50 times what it has been historically.”

Hayes likely referred to both the Board’s efforts to change school start times—which ultimately was forestalled by the Town Council in April—as well as the COVID-19 pandemic, which quickly brought dramatic changes to New Canaan Public Schools.

A Republican elected to the Board two years ago and chair last year, Parkhill worked for a decade in management consulting and the healthcare industry after graduating from the University of Texas at Austin, has three kids in New Canaan Public Schools and has served on the boards of numerous community organizations since moving here nearly 15 years ago.

Parkhill’s chairmanship in the past year “has just been extraordinary difficult, along with obviously the administration, staff and faculty and really everybody in town,” Hayes said.

“And you would never know—even though we know the number of hours she has spent—nobody else would ever know that, I think, because she just leads so eloquently and so modestly,” she said. “And yet she has just complete command of everything.”

In nominating Hayes, a Democrat and former chair of the Board who has served as vice chair since last November, Parkhill said he “continues to be a highly engaged and committed Board member.”

“This will be his sixth year of service to the Board, and as he always has, he continues to offer his expertise, particularly in the financial area,” she said. “An incredible depth of knowledge. And he brings a very valuable perspective to our Board. He is always guided by what is best for the students, and as a parent of three of them, I know he cares deeply about our district and our schools. His insights are always offered through this lens. Brendan has been a great contributor over the years and he is a strong advocate for our BOE priorities and our goals each year. And he has been a great partner this year. As he said, there’s been a lot of unique circumstances and different situations that we are not used to working within, and he has always been a great partner. Just deeply engaged and always available for conversation or some advice. So I appreciate that, too. And I am confident that he will continue to be the strong partner that he has been this year as we continue to navigate this difficult time moving forward.”

Richardson, herself the longtime Board secretary, nominated fellow Republican Mackle Reeves as secretary.

“She has been a tremendous addition to our Board,” Richardson said. “She has been with us almost two years, and she has been the recording secretary for the Reopen Committee for the past few months. And has just done a phenomenal job. She’s detail-oriented, she’s organized, so incredibly thoughtful and such a great contribution to our Board. She has always subbed for me when I can’t be here and she’s done a fabulous job and she’ll be great.”