The Board of Education on Monday formally welcomed the new East School principal to that leadership role in the district.

School officials appointed Kristine Woleck to the position one week ago, the same day Jan Murphy was named principal at West.

Murphy was unable to attend the board meeting, held in New Canaan High School’s Wagner Room. 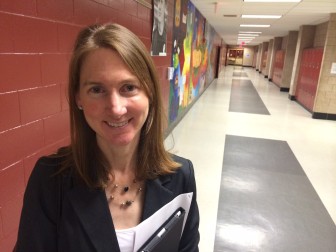 “During that time, Kris certainly took a leadership role in terms of looking at how to develop and implement high-quality curriculum, instruction and assessments in professional development. But she also contributed significantly to many of our district-level initiatives, our response to intervention, certainly she worked with that committee, steering committee, and she also has taken a lead role in terms of teacher evaluation, part of that was an outgrowth of Kris’s being recognized at the national level in 2009, she applied for and was accepted as one of 13 Classroom Fellows with the U.S. Department of Education and Kris spent some time working back and forth, while she was working full time for us, representing the Northeast Region within the Department of Education as they studied the connection between policy and implementation at the level of the classroom.”

She worked for two years under the mentorship of retiring East School Principal Alexandra “Bunny” Potts—a New Canaan educator for 25 years—and for this past year worked under West School’s acting principal, Joanne LaVista, who also is retiring. (LaVista started in New Canaan in 1980 as a teacher at popular, beloved and innovative Center School, now a parking lot.)

Another Center School educator, Board of Ed Chair Hazel Hobbs, welcomed Woleck to her new role on behalf of the board, noting the contributions Woleck had made to both the town and the federal education department.

“We are grateful for all of those and the wonderful tradition of strong leadership at East School will continue for our kids,” Hobbs said.

Speaking directly to Woleck, who was in attendance and sat beside Potts, Kolek said: “We’re proud of you and I know that the school community and the parents are going to be thrilled.”