A motorist backed up onto a sidewalk at Main and Elm Streets Sunday morning near the William Raveis building. 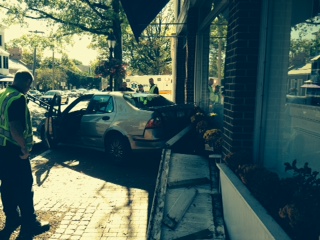 Officials look on where a motorist appears to have hopped the sidewalk at Main near Elm Street and Morse Court in reverse on Sunday Oct. 5. Contributed photo

The sedan appears not to have struck the building itself some time prior to 11:30 a.m., but damaged a planter along its Main Street side, according to an eyewitness to the accident’s aftermath.

The public information officer of the New Canaan Police Department was not immediately available for comment.

Officials with the New Canaan Fire Department say the motorist was a woman and that she appeared not to have been injured, nor were any pedestrians. 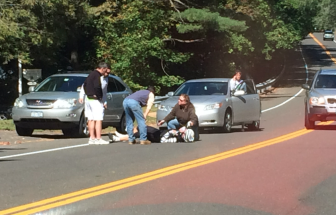 Motorists stop on Route 123 near the New Canaan Field Club where it appears that a cyclist went down on Sunday, Oct. 5. Contributed photo

Just a bit later in the day, around 12:20 p.m., NewCanaanite.com received a report that a cyclist appeared to have been injured on Smith Ridge Road/Route 123 in the area near the New Canaan Field Club.

Fire officials say the cyclist was male and that it wasn’t immediately clear whether a car was involved. Personnel with the New Canaan Volunteer Ambulance Corps tended to the injured cyclist, fire officials say.

We will update both of these incidents as information becomes available.